We were parked up by 8.15 this morning at Dalrigh near Tyndrum and walking by 8.30 as we had a long, hard day in front of us.  Our plan was to climb Ben Lui, often described as the finest mountain in the Southern Uplands.  It stands high above its neighbours, and its splendid shape in unmistakable.  In particular, the great north-east corrie, Coire Gaothaich, gives the mountain an alpine character as it often holds snow well into the summer.  We also intended to complete the full round including Ben Oss and Beinn Dubhchraig with the out and back to pick up Munro 281, Beinn a'Chleibh.  The day began with a long four mile walk in along Glen Lui alongside the fantastic River Cononish.  As we walked along the glen we were pleased to see a family group of stonechats with the young birds lining up along the fence to be fed.  Ben Lui loomed in front of us and it seemed impossible that there could be a route through the vertical looking corrie and onto the alpine-looking north-east ridge.  Once across the Allt an Rund burn, though, it was obvious that there was a route, although very steep particularly up the corrie wall onto the ridge.  Although we had excellent views and warm sun during the day, it chose this moment to rain, necessitating full waterproofs, so once again I was lathered and in in danger of becoming a blob of lard!!!  Eventually we pulled onto the spectacular summit, however, just as the cloud began to clear and another Munroist arrived from the opposite direction; he, however, was completing his last Munro, having climbed his first in the 1960's!!!

The long day in front of us meant there was little time for stopping so we quickly set off down the south west ridge to the col before scrambling up to the small Munro of Beinn a'Cleibh.  From here there were excellent views across to Glen Coe and Bidean nam Bian.  It is easy to become carried along on the crest of the Munro wave and to forget the hundreds of lower hills that may not even reach Corbett status (2500 feet), many of which have far more to attract the walker than some Munros; Stac Polliadh and Suilven, in the far north-west come to mind.
Once back at the col we had to contour around the slopes of Ben Lui (to avoid its re-ascent) to the col below Ben Oss.  The traverse is pathless and the path up Ben Oss is described as 'shy', although we did pick it up and were grateful for it.  Once up this summit the way along a superb, broad and high level ridge to Bein Dubhcraig was straight forward and delightful.  There were spectacular views down into the glen and across to Ben Lui wihich was in shadow and looked very mean.  Loch Lomond and Ben Lomond were spread out before us to the south across miles of untouched moorland.
Wildlife highlights were the two mountain saxifrages, yellow and starry, that we found in the corrie on Ben Lui and are restricted to Scottish hills.  We also found plenty of butterwort and sundew, both specialists of nitrogen poor soils and both insectivorous.  I spotted a single hooded crow early in the day and a couple of ptarmigan whilst contouring round Ben Lui.
Once we had submitted on Beinn Dubhchraig we could see the car park three horizontal miles away but 3000 feet below us. It was a long tortuous descent across very boggy country with the added delight of walking through a remnant of ancient forest of Caledon, beatifully old and noble Scots pine trees that at one time covered much of Scotland.  The remaining bastion of the Caledonian Pine Forest is in the Cairngorms National Park, where it is home to the red squirrel, crested tit and capercaillie.
Eventually at 7.00 pm, after nearly 10 1/2 hours on the hill we wearily reached the car.  Just before that though we had to negotiate the river where the bridge had collapsed over a year ago; this involved not a few gymnastic manoeuvres.  It was very definitely beer o'clock with steak and chips to celebrate.  A shower was the order of the day first though; we were very smelly!! 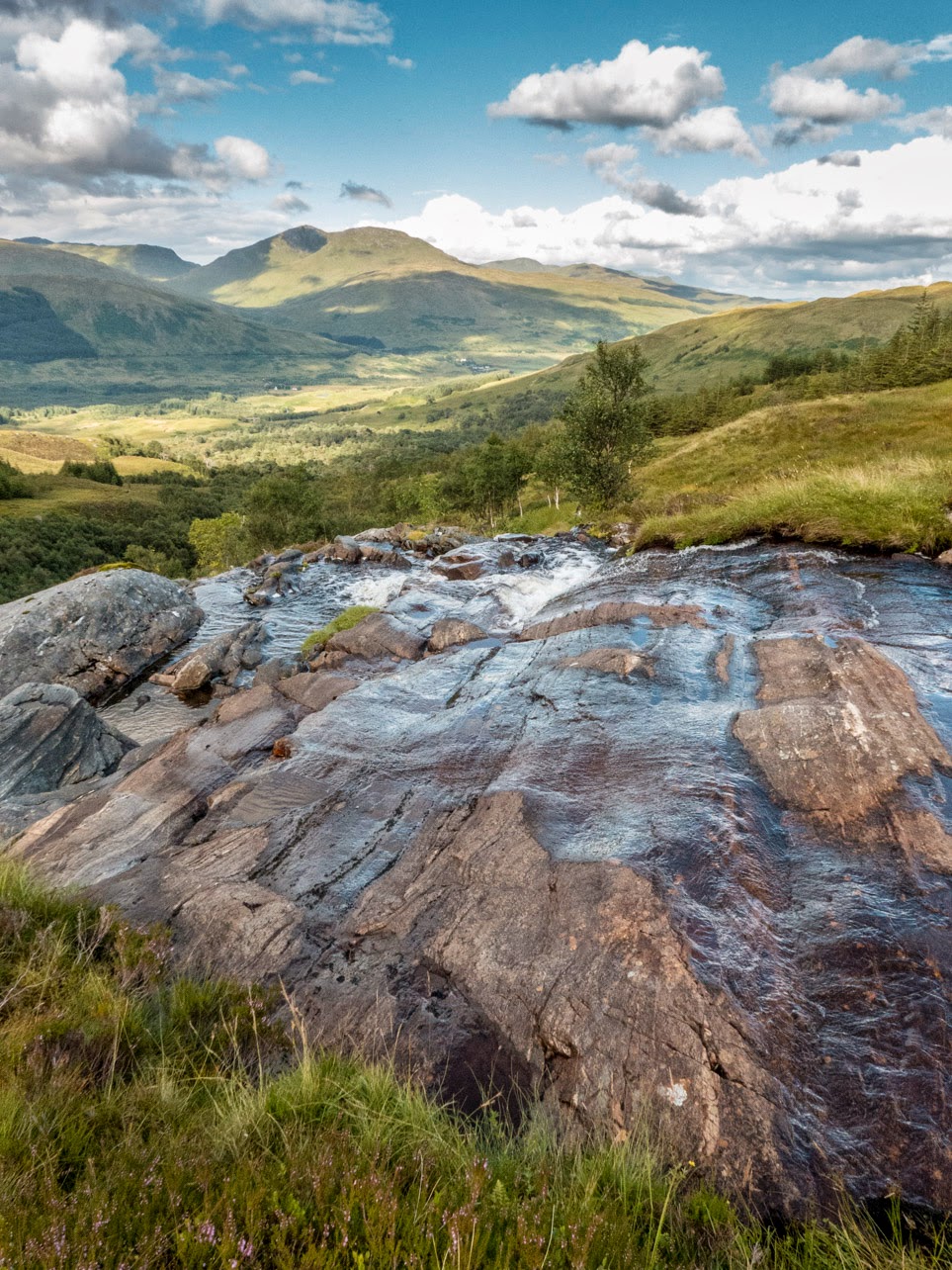 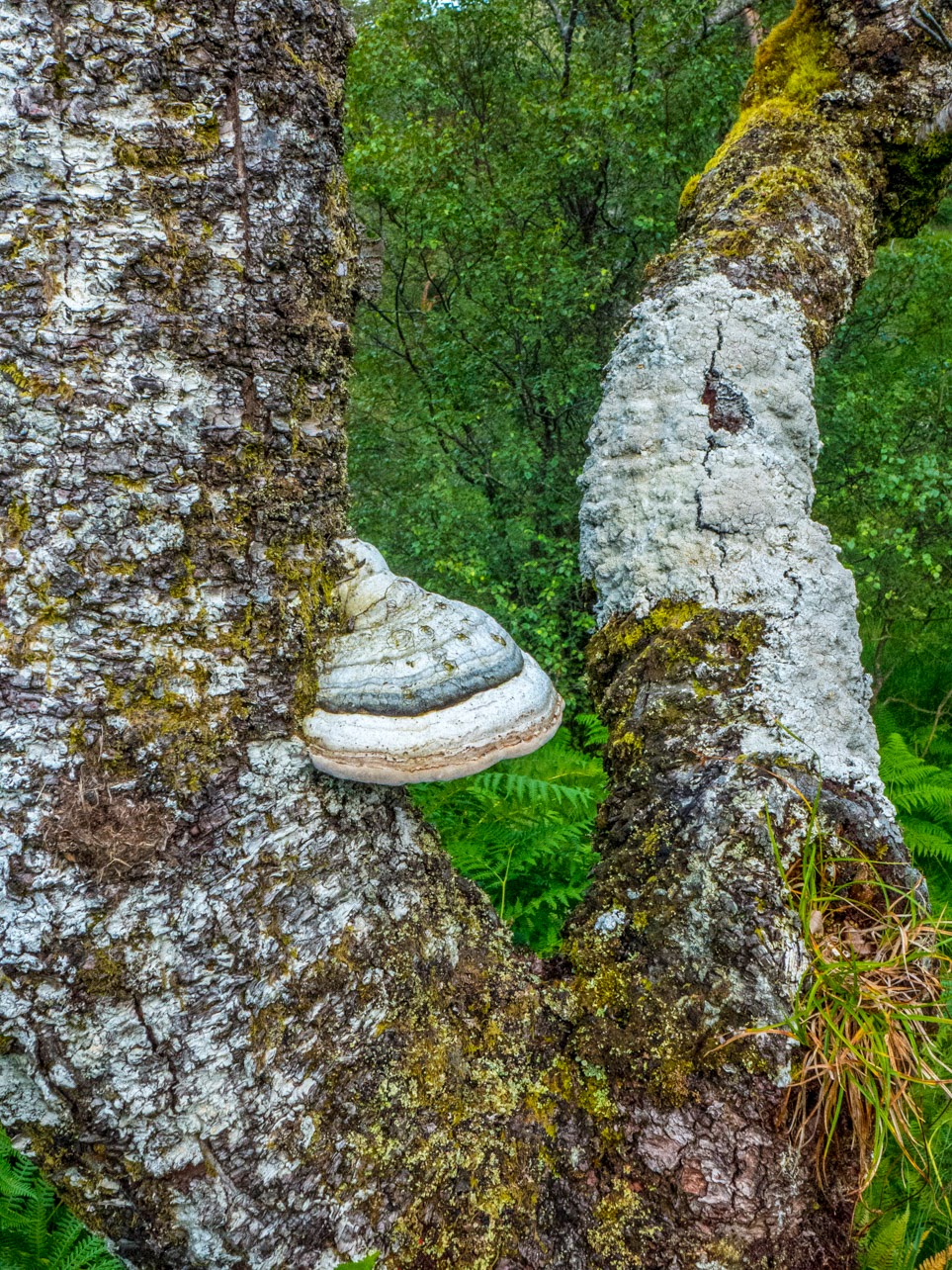