As part of my degree body of work I intend to walk from Lincoln Cathedral to Kirkstead and Woodhall Spa, where I was brought up, along the Viking Way long distance footpath, visiting all of the religious houses of the Witham valley.  Today I covered the first section of my journey from Fiskerton to Barlings Abbey.  In medieval times, when these abbeys were built, in much of the valley would have been the many channels of the River Witham, then in its natural state.  It would have consisted of a maze of channels with marshy ground in between with still, marshy pools where iron age peoples made offerings to their gods of high value weaponry, notably the Witham Shield now in the British Museum, and log boats.  At Fiskerton archaeologists have discovered the remains of a wooden causeway built out over the marsh, not to cross it, but to reach the pools for ceremonial purposes.  The remainder of the valley and Wolds edge would have been forested with small leaved limes.  The Lincolnshire Limewoods are the most important example of this forest remaining in Britain and have been designated a National Nature Reserve.  They date back to prehistoric times and provide a range of habitats for wildlife.  The Witham Valley has one of the largest concentrations of abbeys and priories in the country.  These medieval religious houses were located close to the river following a tradition of ritual use in the prehistoric period, and because it was an important link to Lincoln and the port at Boston.  In medieval times some of the woodlands would have been owned by the abbeys and played a vital role in the local economy.  Fiskerton village dates back to at least medieval times, its name originating from Old English meaning 'the farmstead village of the fishermen'.  In Fiskerton churchyard both snowdrops and winter aconites were just coming into flower.  It was good to watch a marsh harrier hunting the wet meadows and fields between the village and the river and a little egret was busy fishing in pools and river edge.  Fieldfares were plentiful and noisy in the hedgerow trees, especially at Low Barlings by the abbey.  All that remains of the abbey today are earthworks and a single standing wall, the eastern arch of the north arcade of the church nave.  Some detail decoration still remains similar to that in the chapter house at Southwell Minster.  The Abbey was founded by the Premonstratensian order in 1154.  It became one of the richest and most influential of their houses in England, with most of Barlings income coming from wool production.  The abbey was dissolved in 1537 and the abbot and four canons were hanged for treason, for taking part in the Lincolnshire rising.  On the day I completed the walk the weather had been incredibly wet and footpaths were thick mud in places and fields flooded. 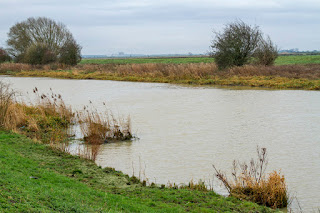 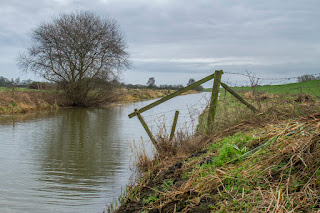 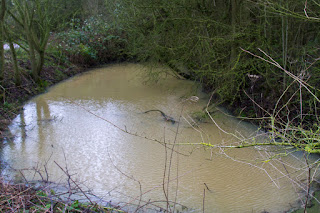 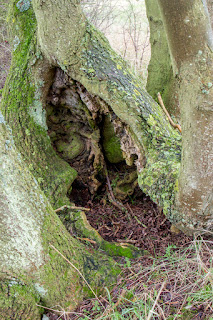 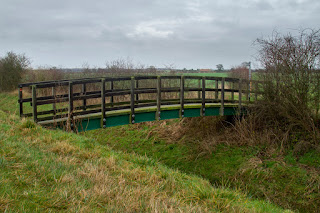 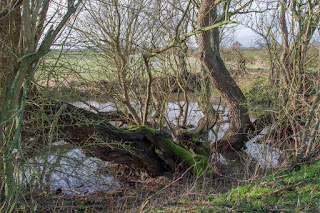