A somewhat more relaxed start today, although it did begin with a rather bracing swim from our beach at the insistence of my leader, something I shall not be indulging in again.  To say it was freezing would be putting a positive spin on it!! A hot shower  and breakfast soon warmed us up and in the fullness of time we set off once more along The Wee Mad Road but this time, instead of turning right at the end for Achiltibuie, it was left alongside Loch Lurgainn to the Stac Pollaidh car park.  The mountain reared up from the road and the walk, although short, was tough: either steeply up or steeply down!!  It played havoc with my dodgy knees!  As we climbed higher and crested the shoulder of the mountain we enjoyed superb views of Cul More and Cul Beag and in the distance Suilven.  Cloud topped these larger hills and, sadly, the excellent views were tempered somewhat by haze.  The final climb to the summit ridge was extremely steep, but the position  was spectacular with a vertiginous drop straight to the car and the complex mass of Ben Mor Coigach beyond.  I scrambled up to the east summit while Heather waited at the col but I left the rather technical west summit to those with a better head for exposure, contenting myself with the thought that the views would be the same.  At one time this whole area was covered with a thick layer of soft red Torridonian sandstone but over millennia it has been scoured by ice and water and the shark-like fins of the mountains is all that remains, leaving them standing isolated in the flow country. To return to the car we took the westward trending path until it joined the main one circling the mountain.  Although, supposedly, less steep this path was no kinder to my creaking knees.  Once back at the car we wasted no time taking off boots as the infamous clegs descended en masse, the first time we had been bothered by them. Stopping only for some shopping in Lochinver, which was buzzing with talk of the day’s referendum on independence, we were back for an early meal for a change. 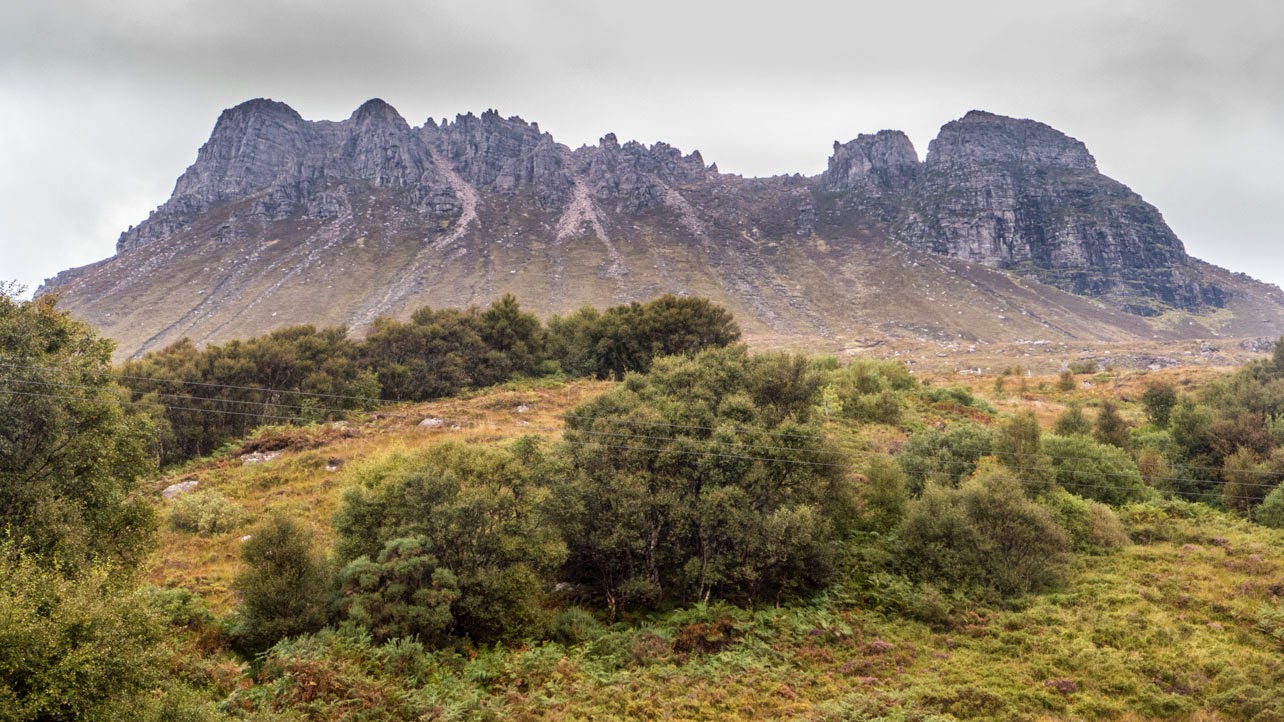 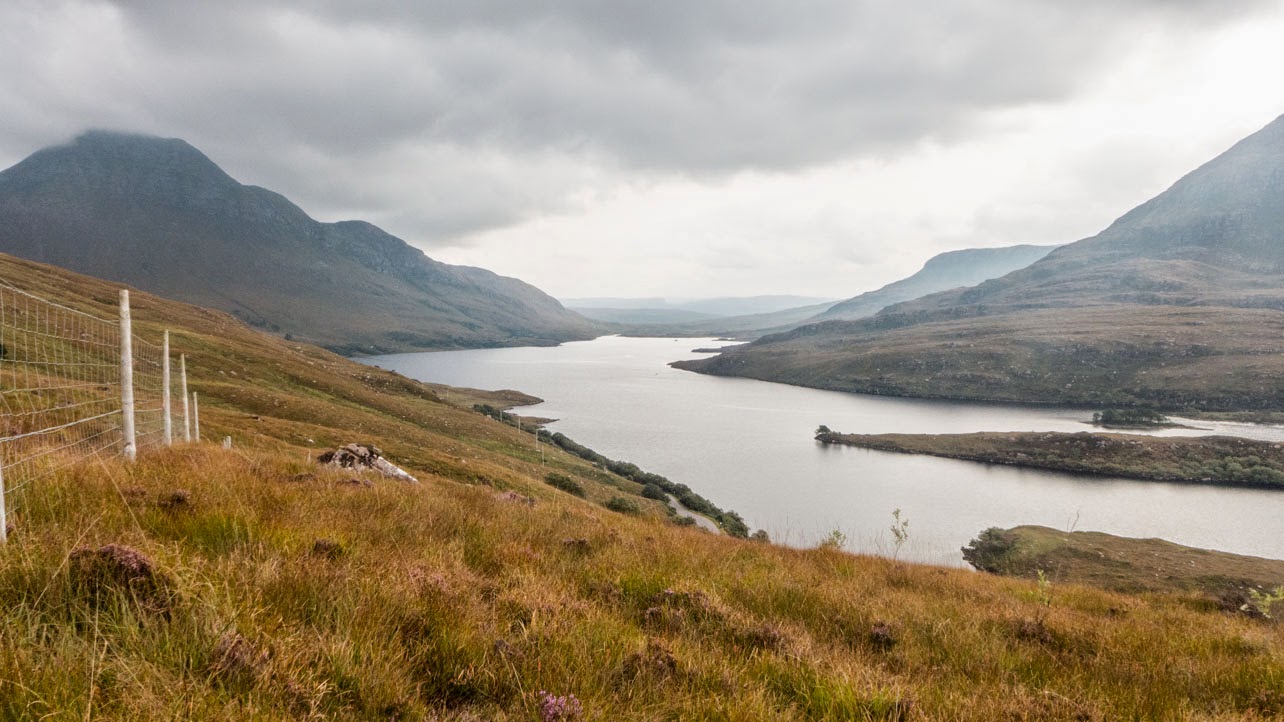 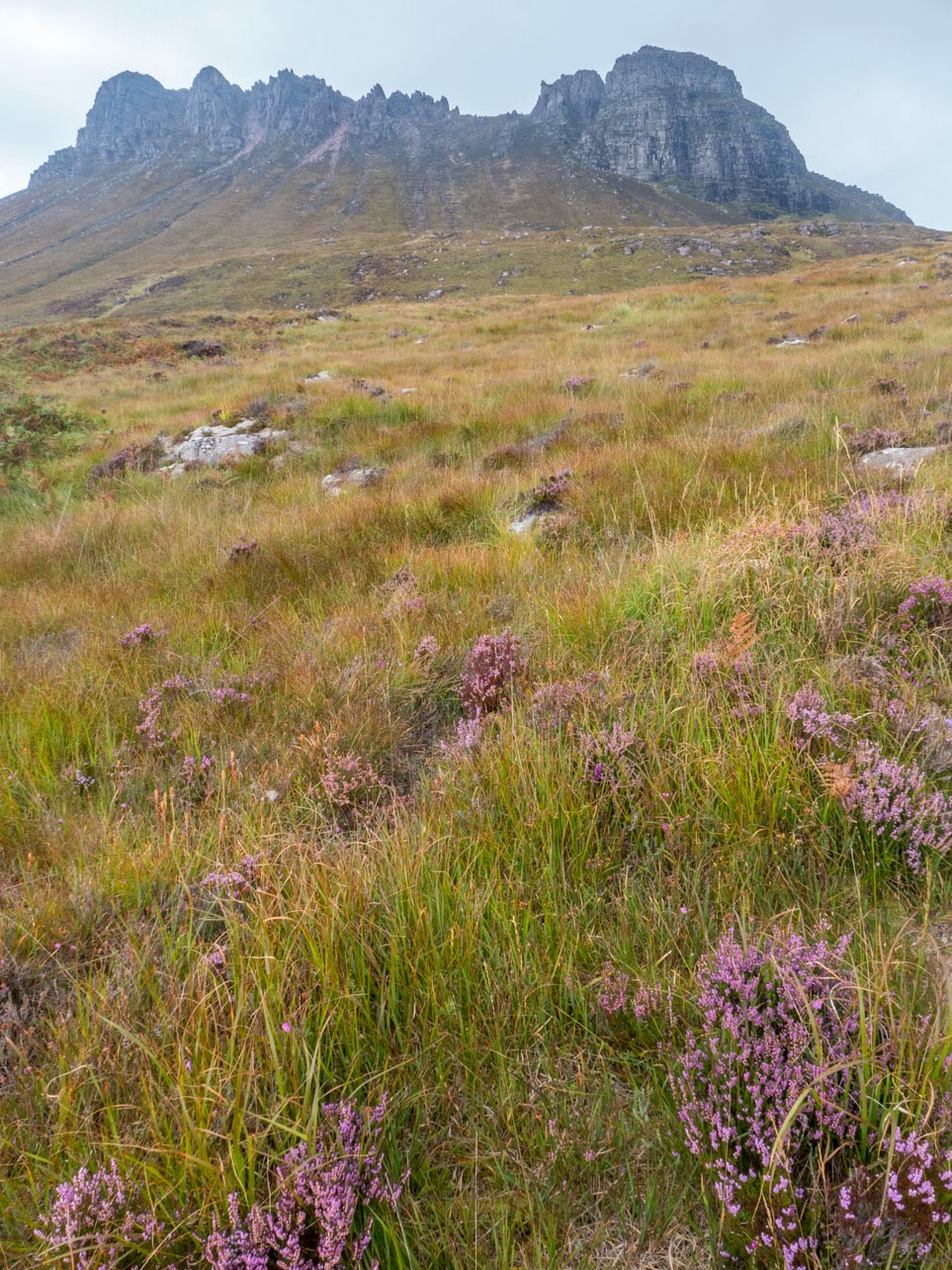 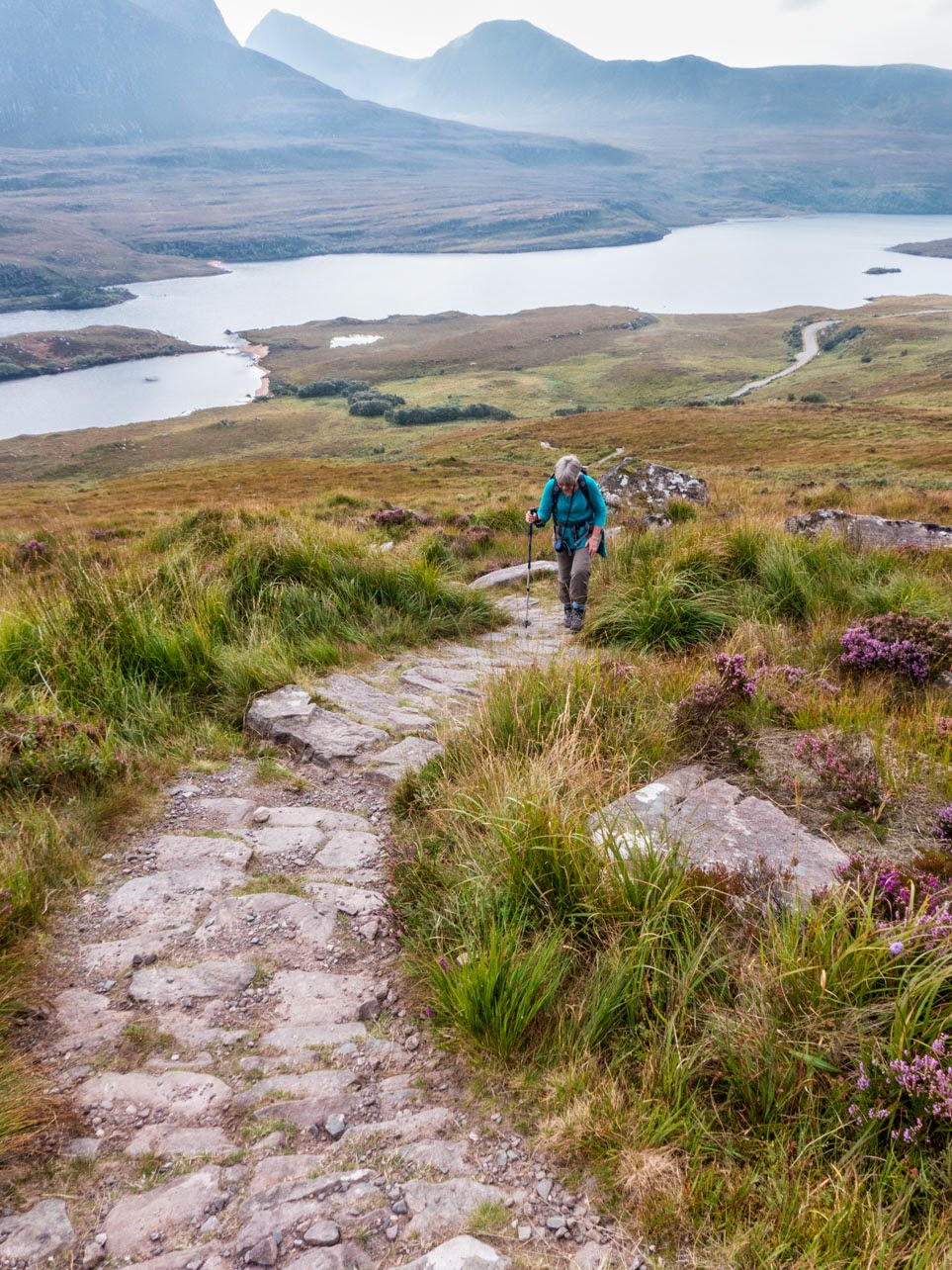 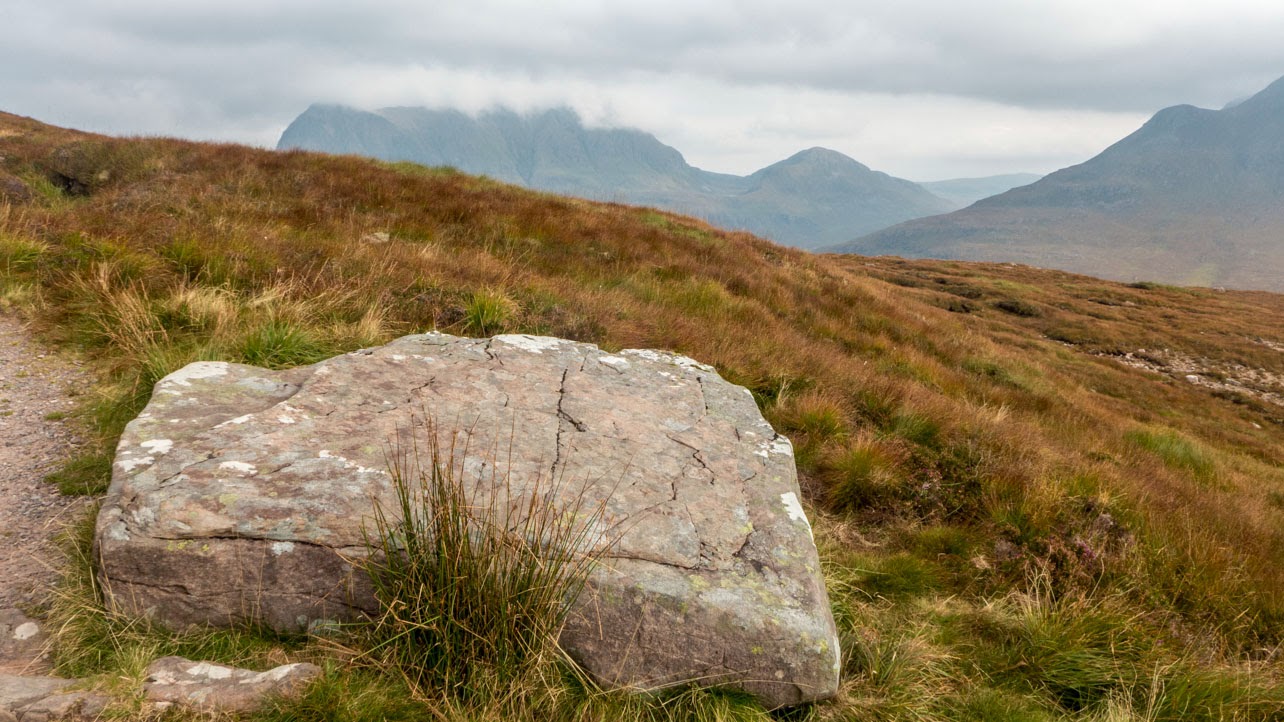 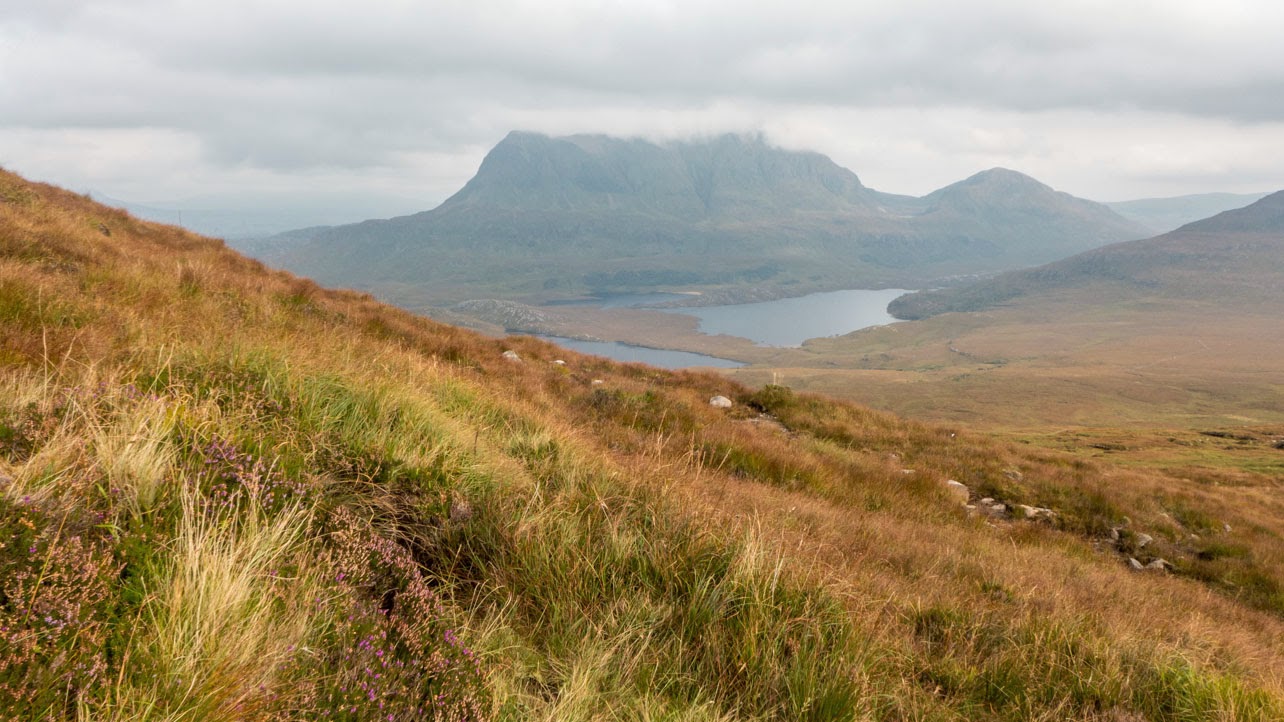 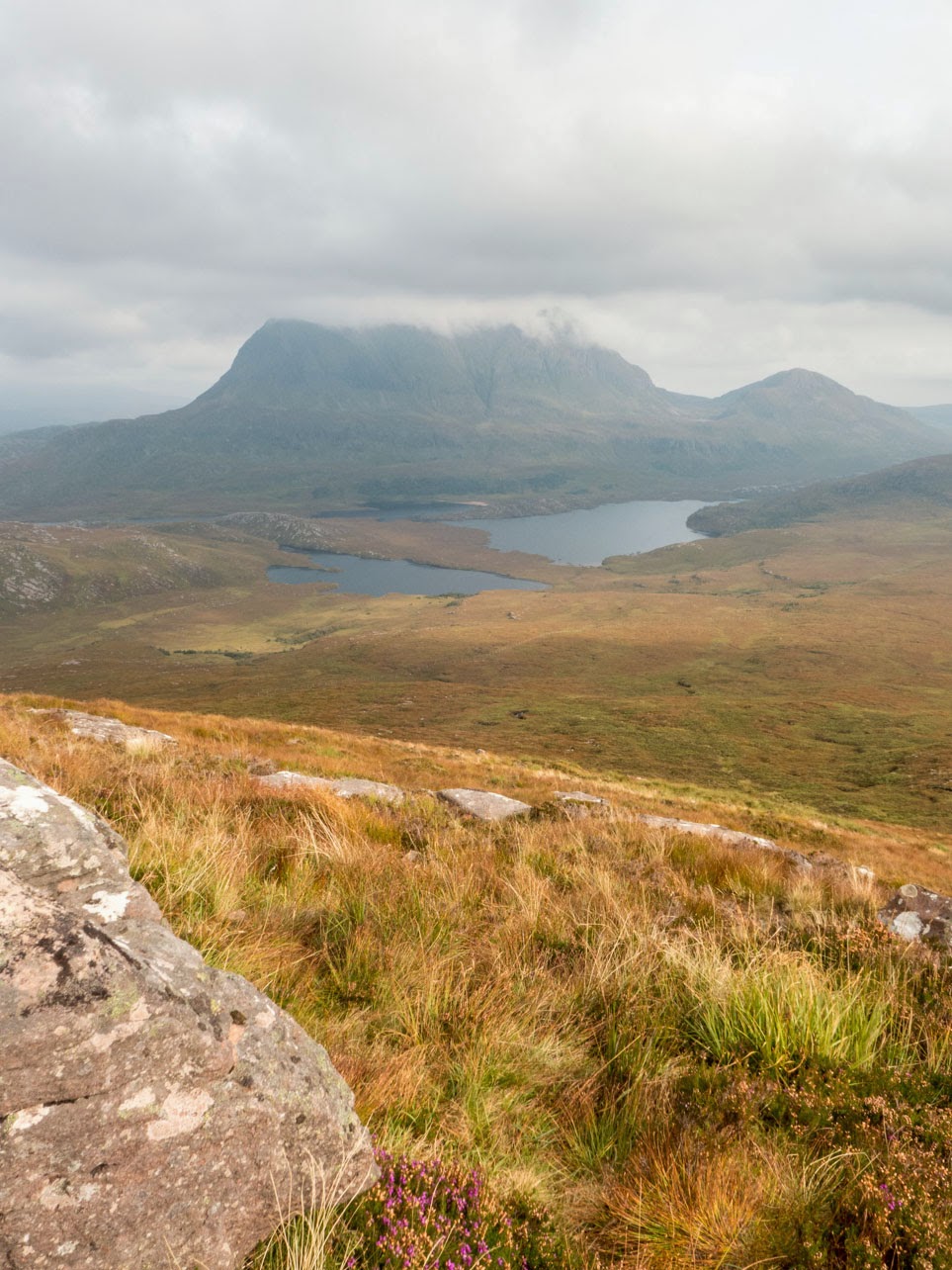 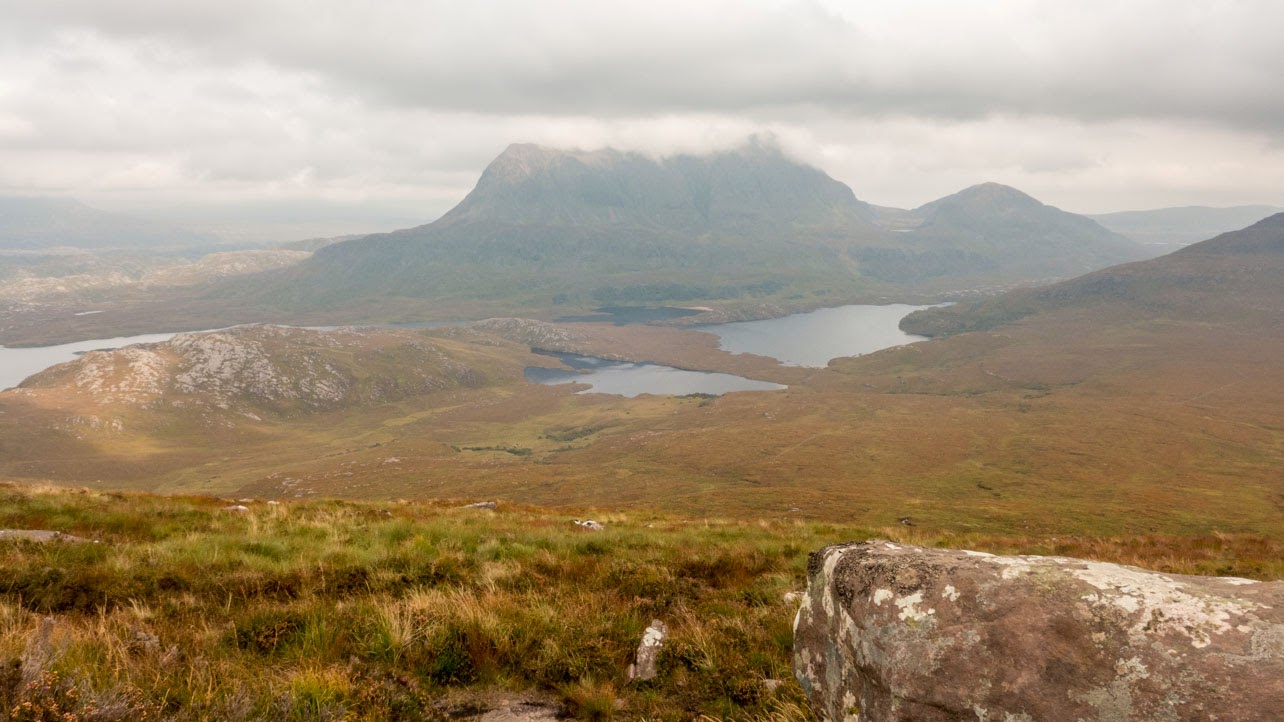 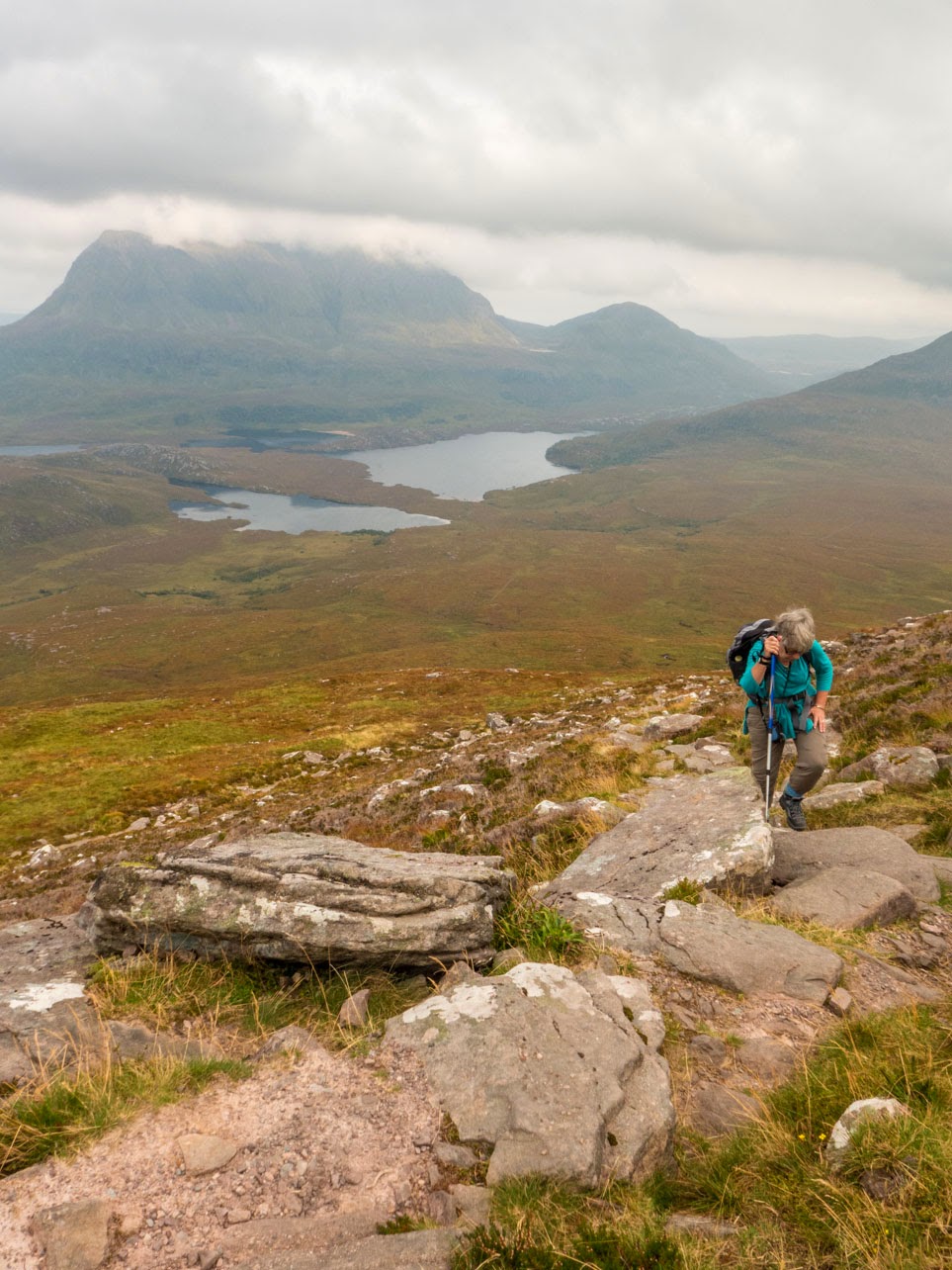 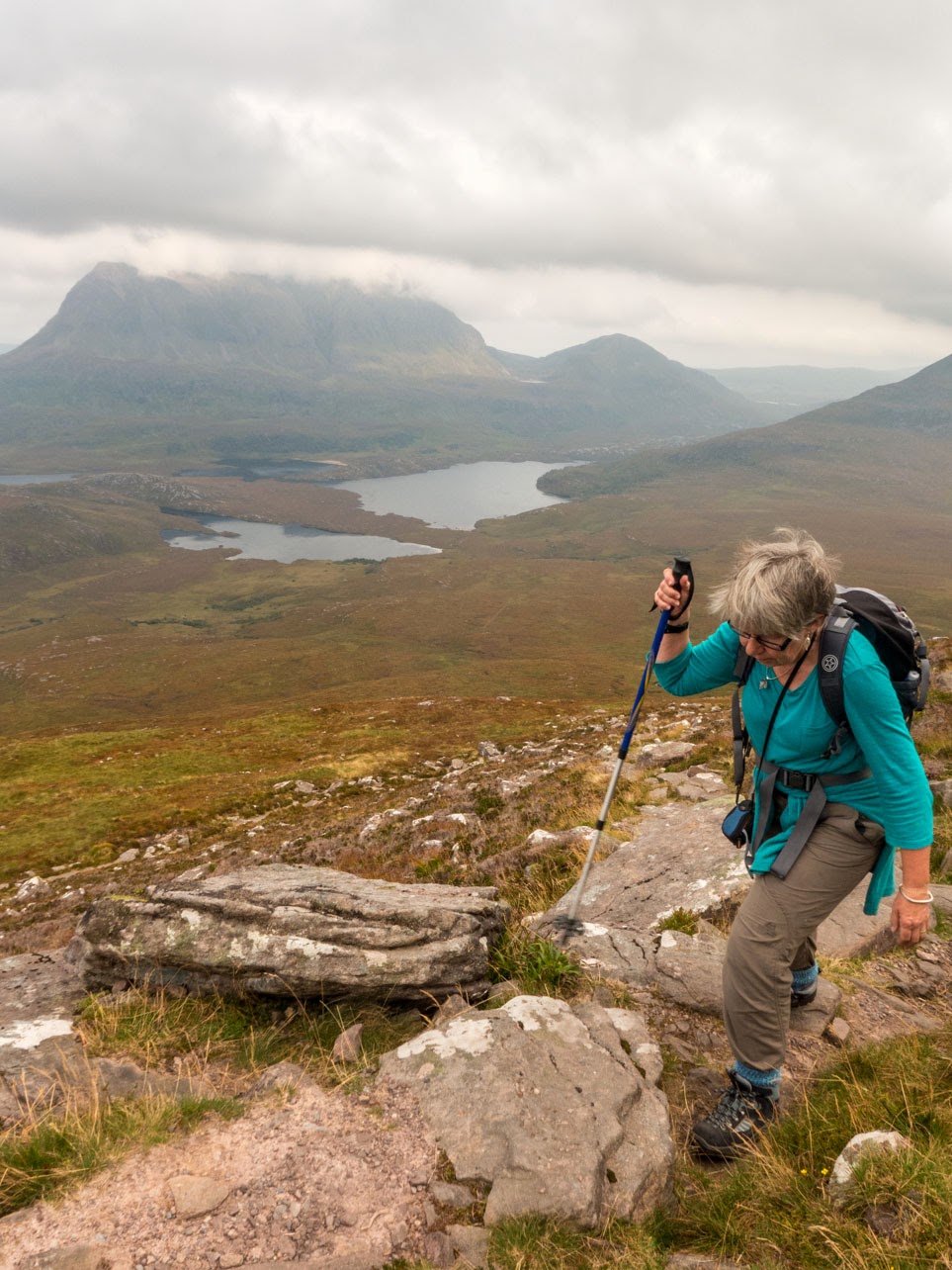 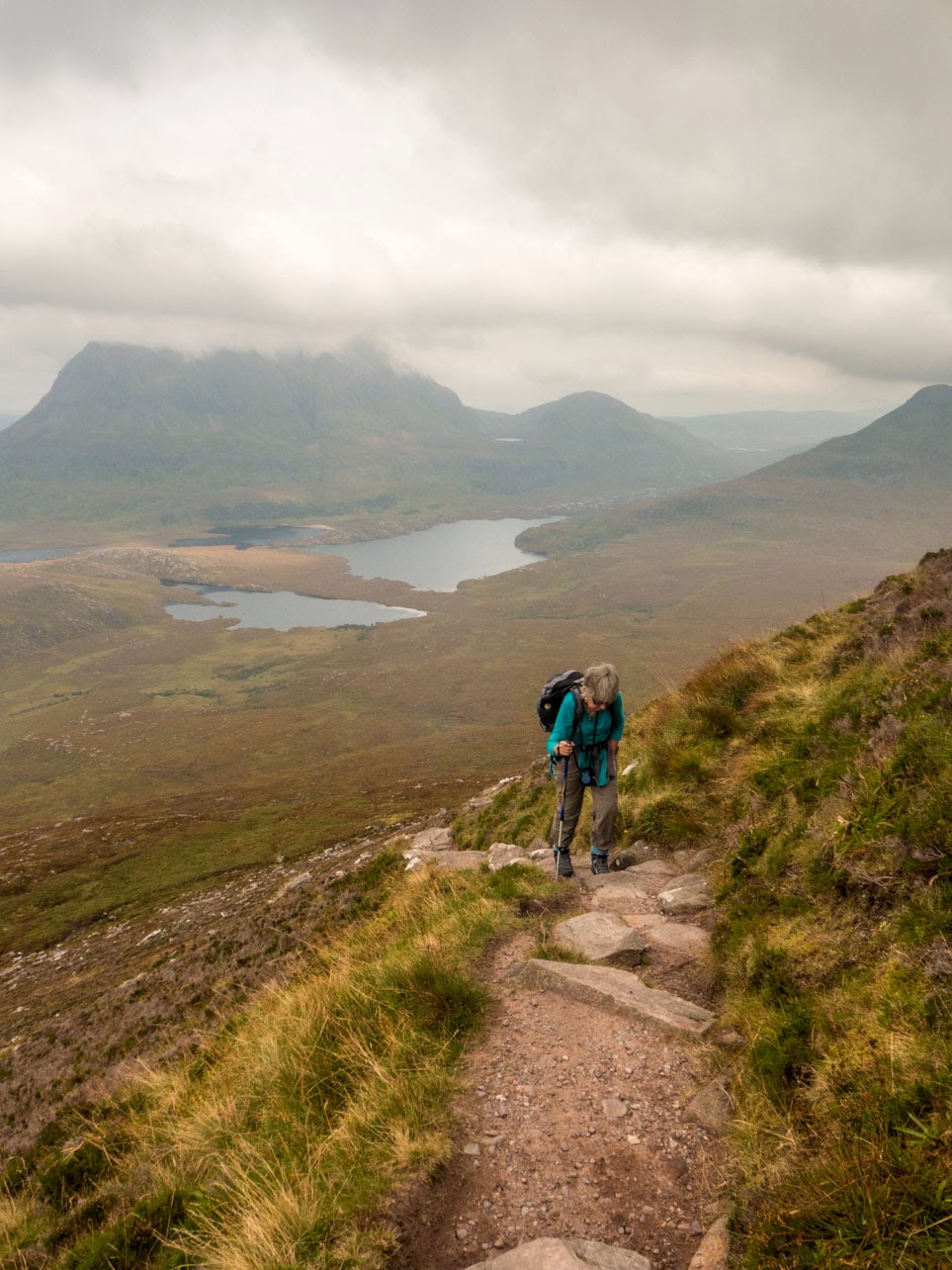 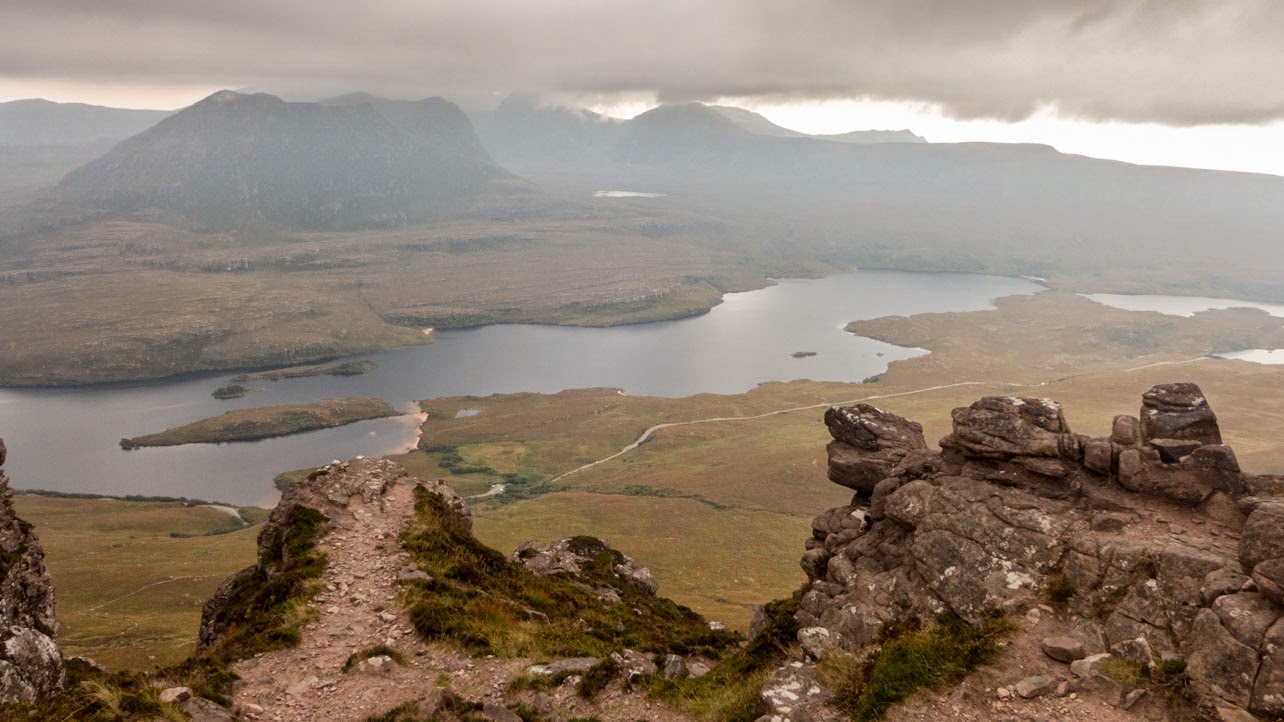 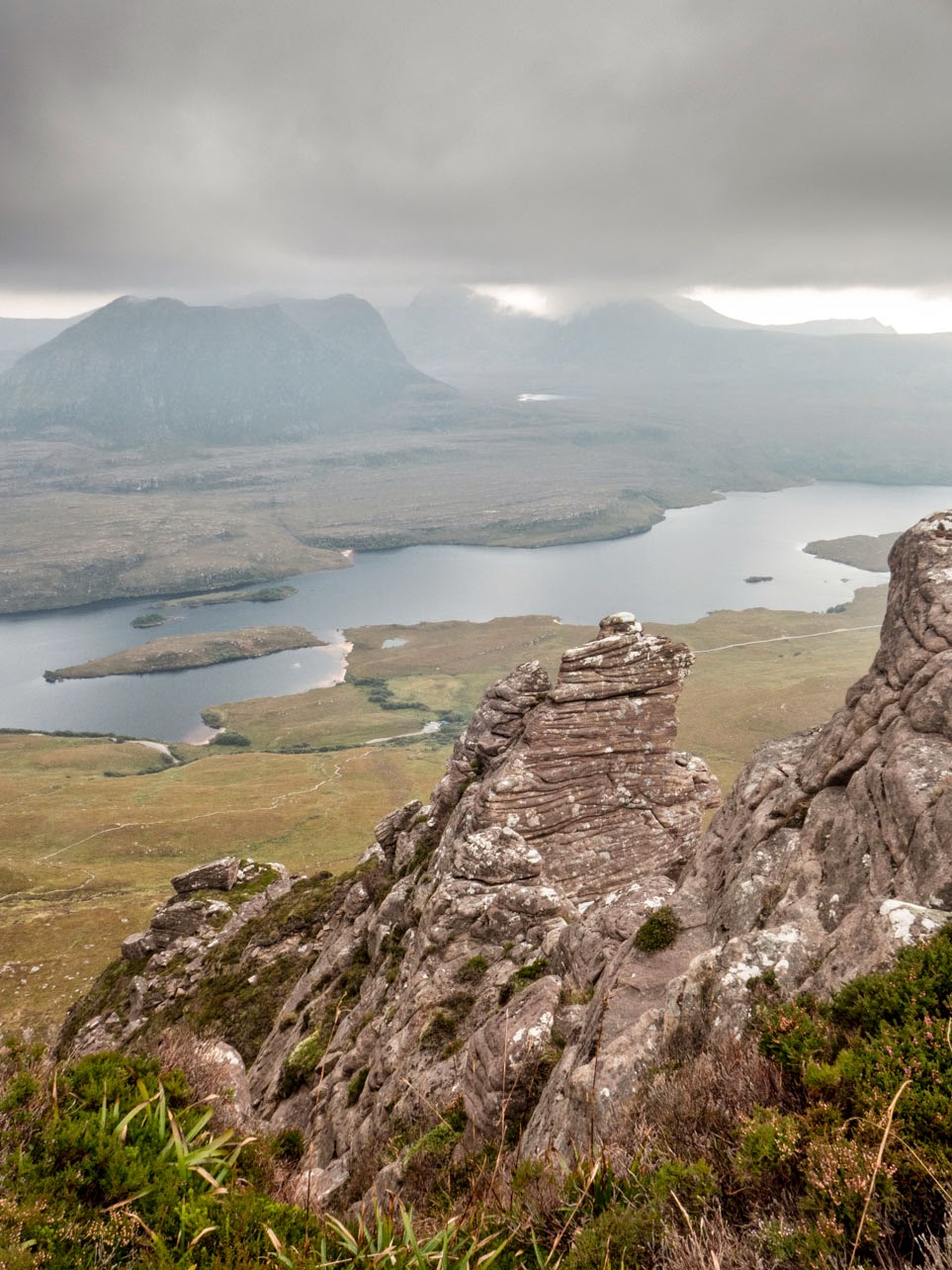 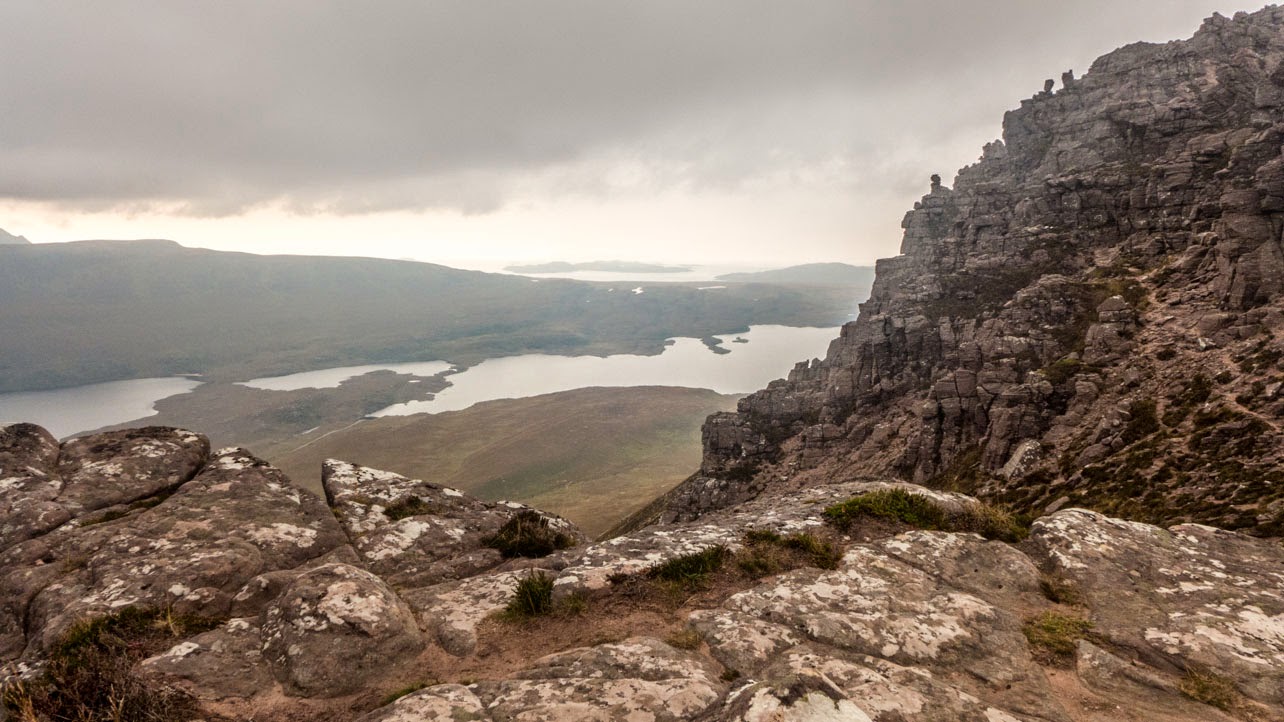 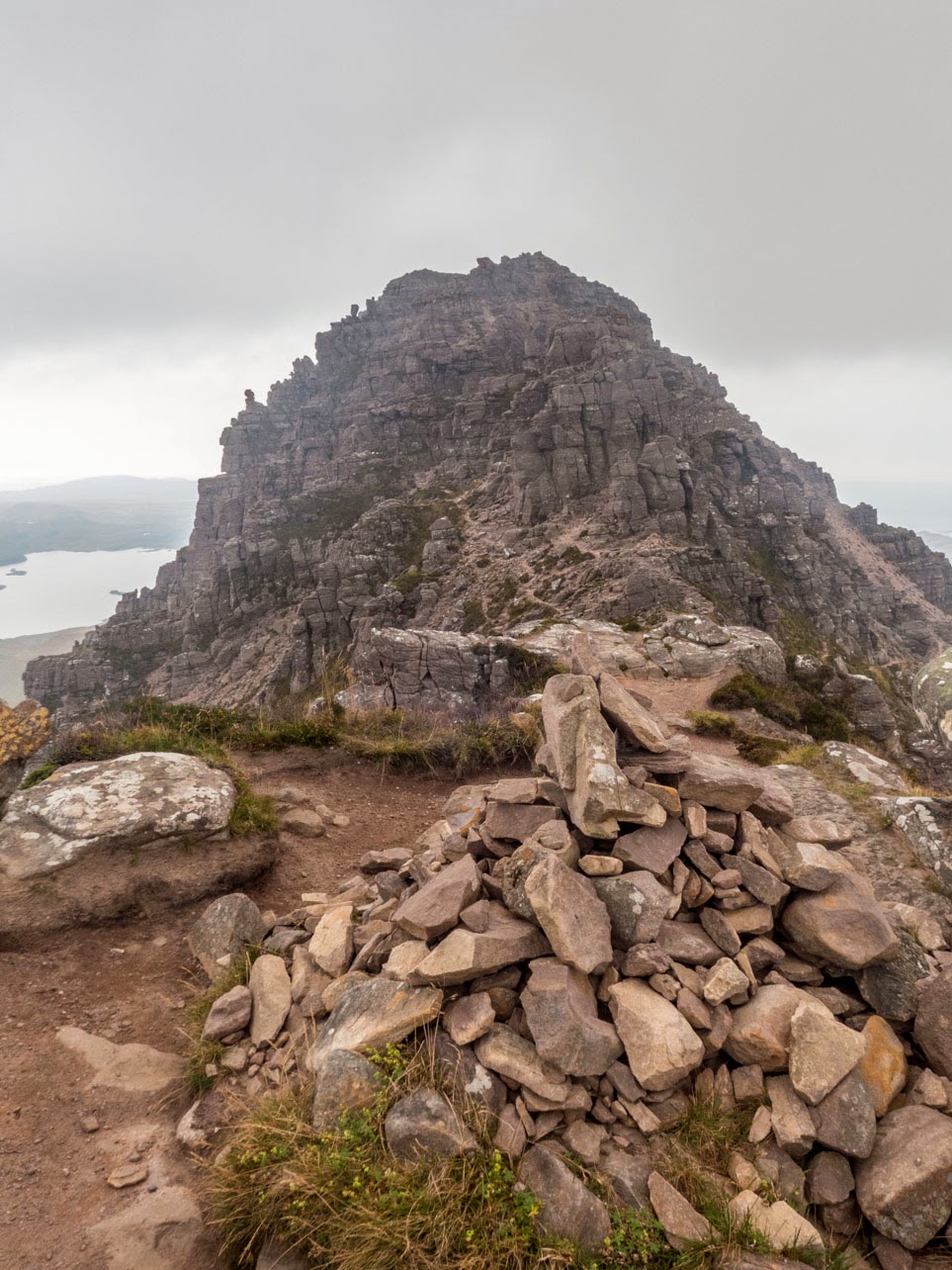 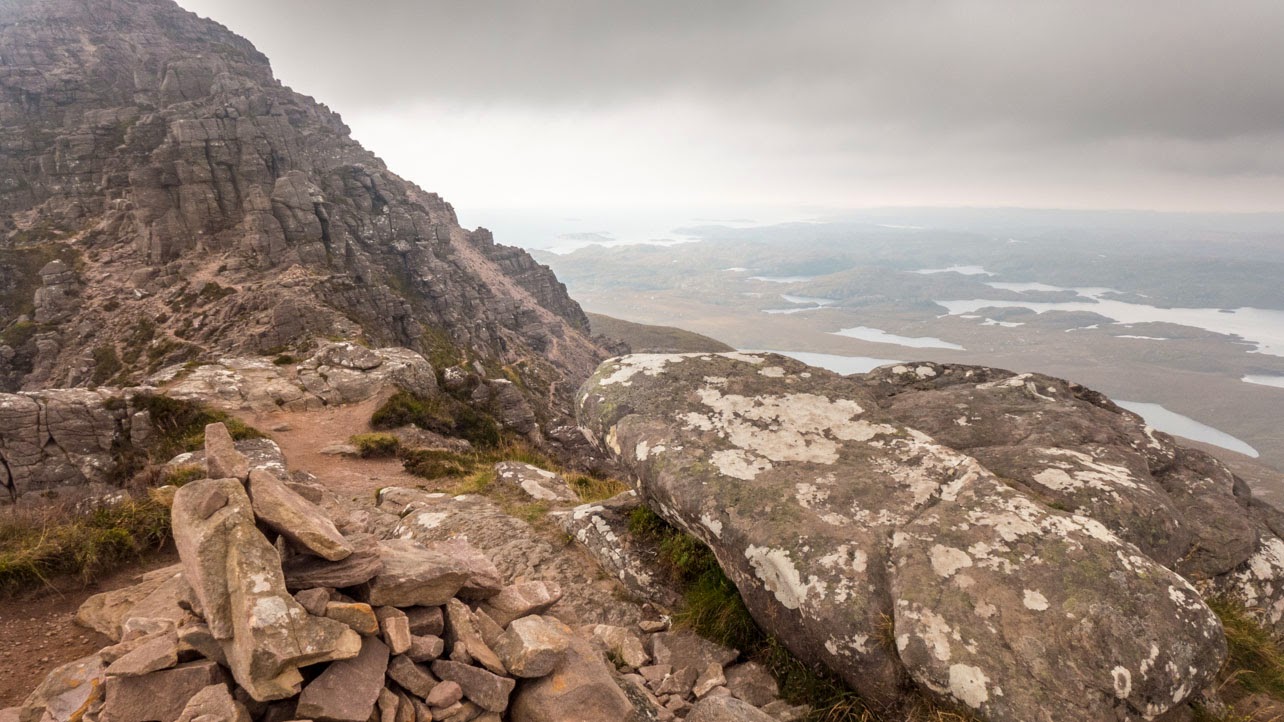 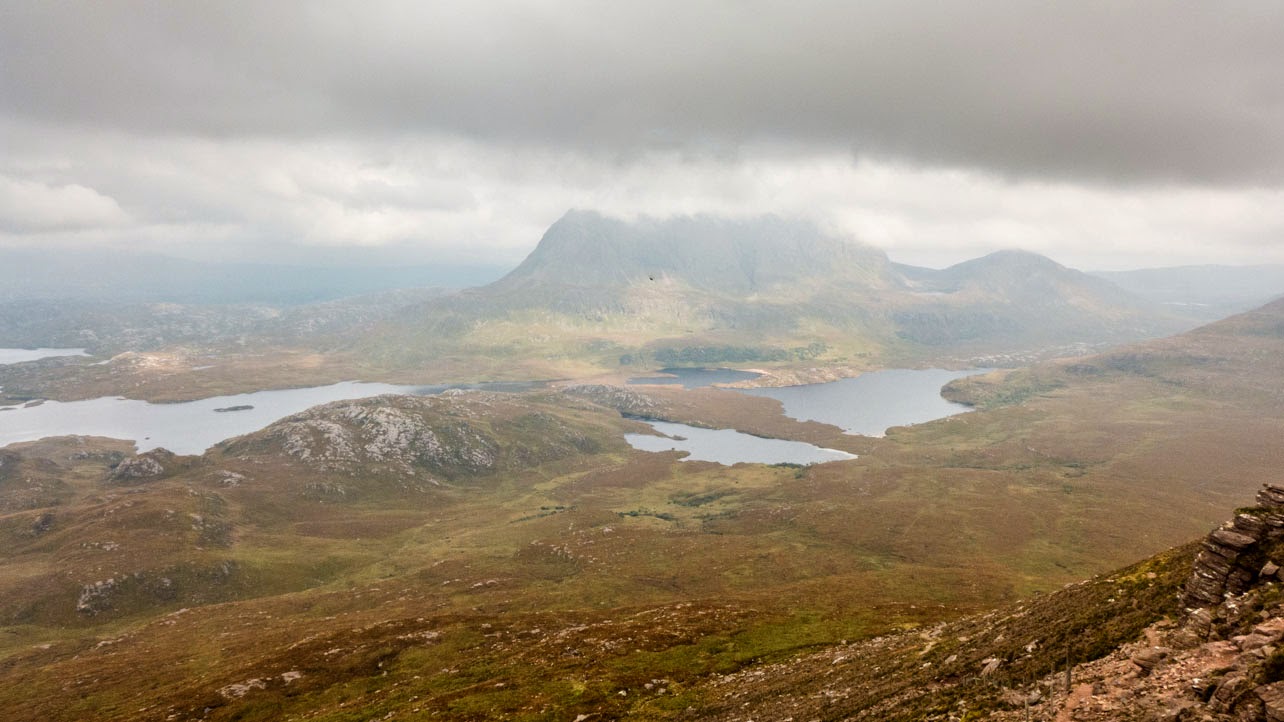 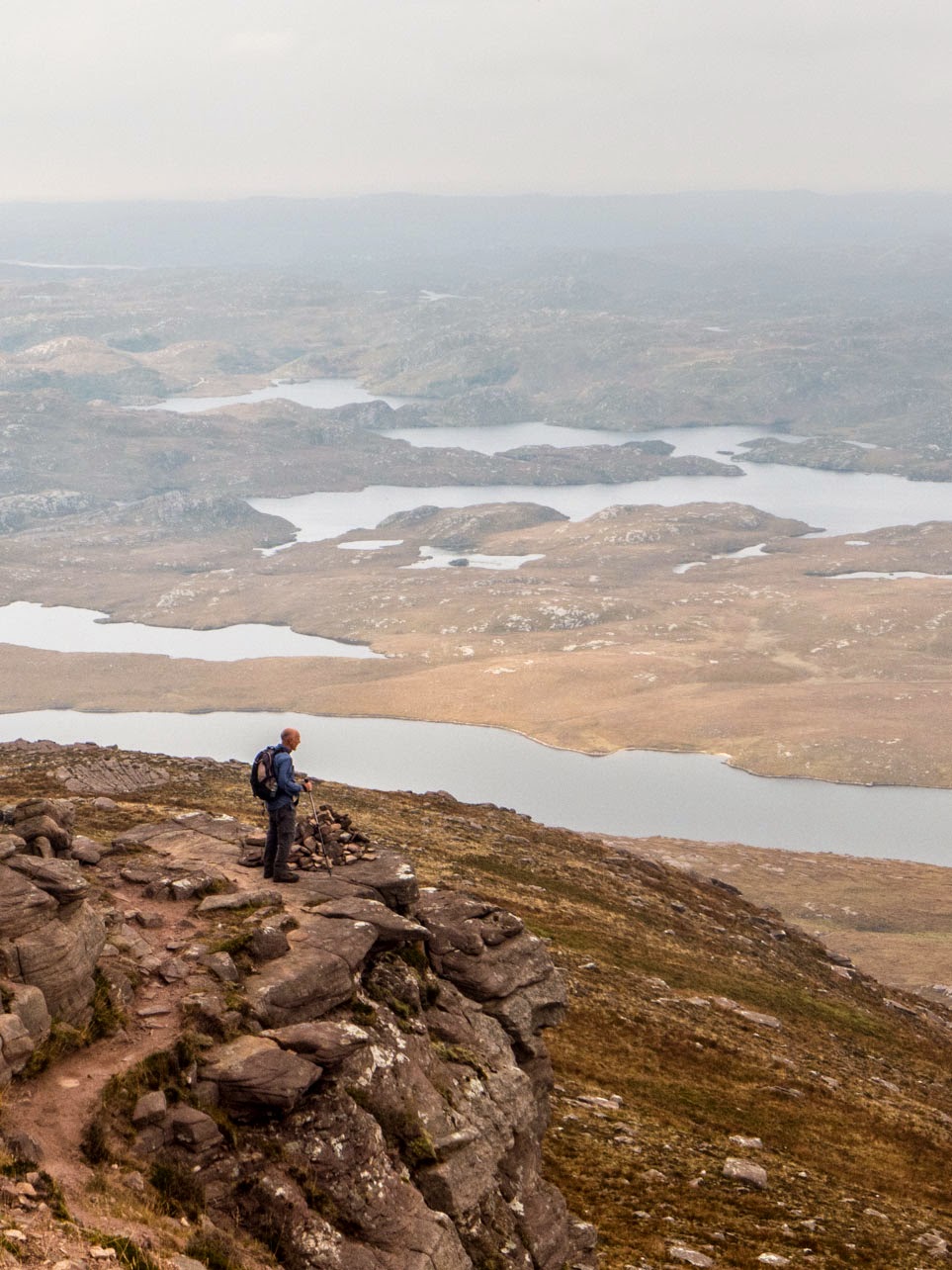 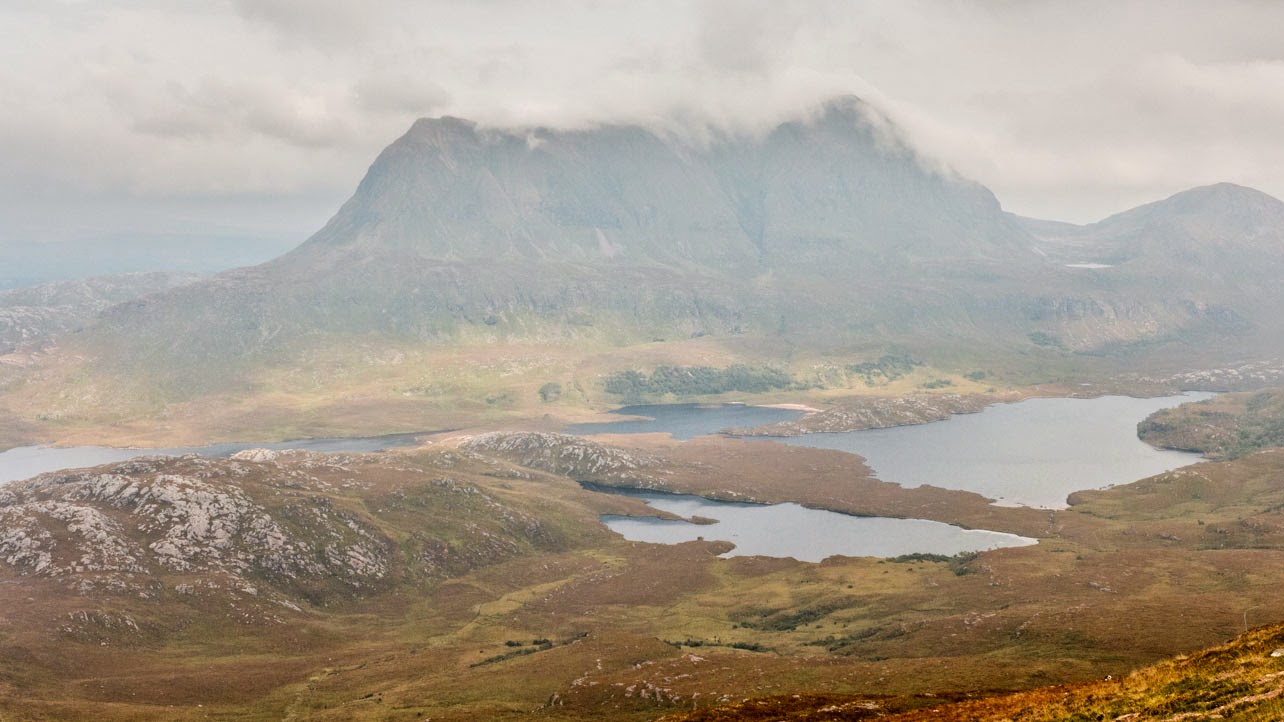 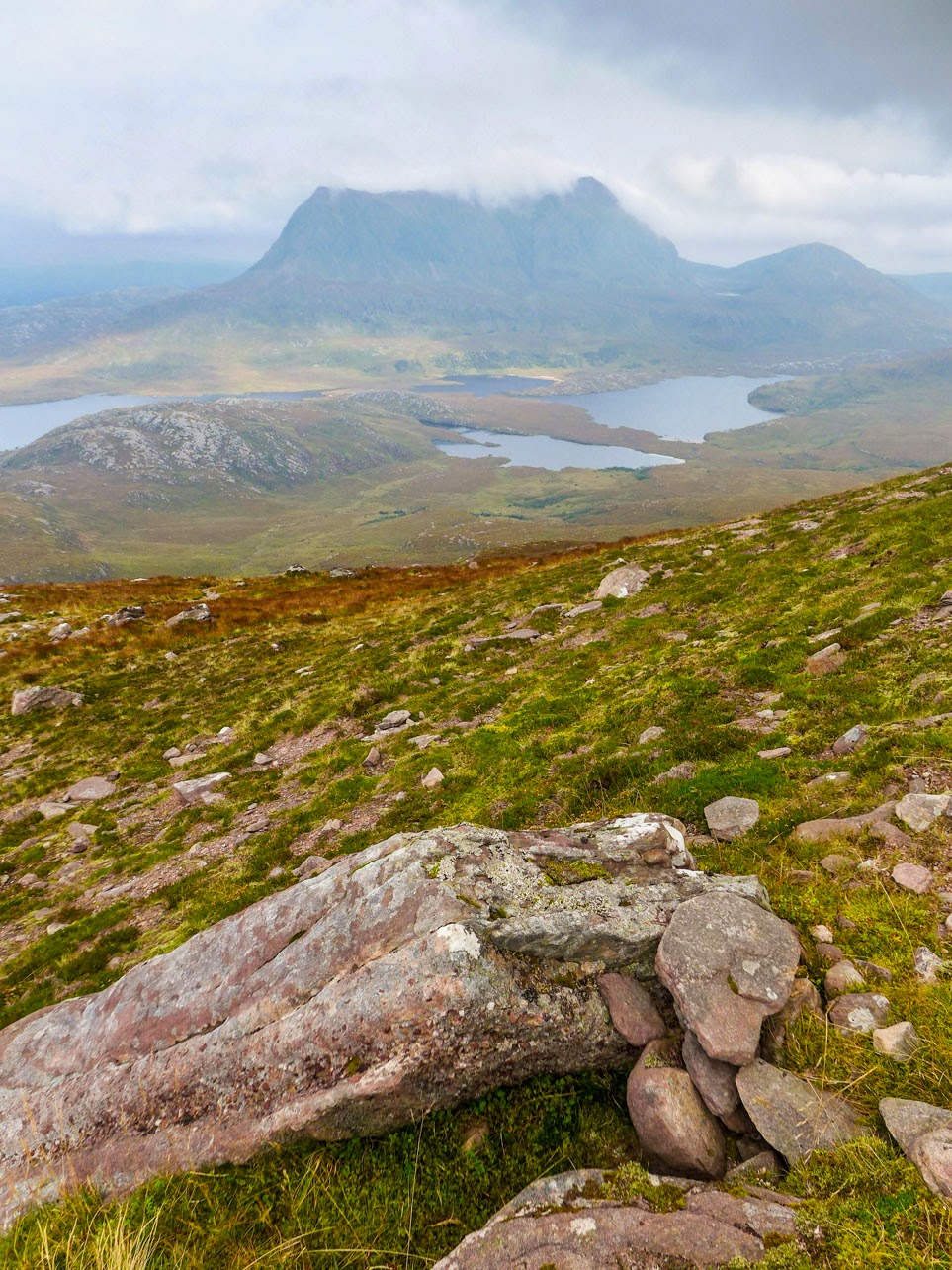 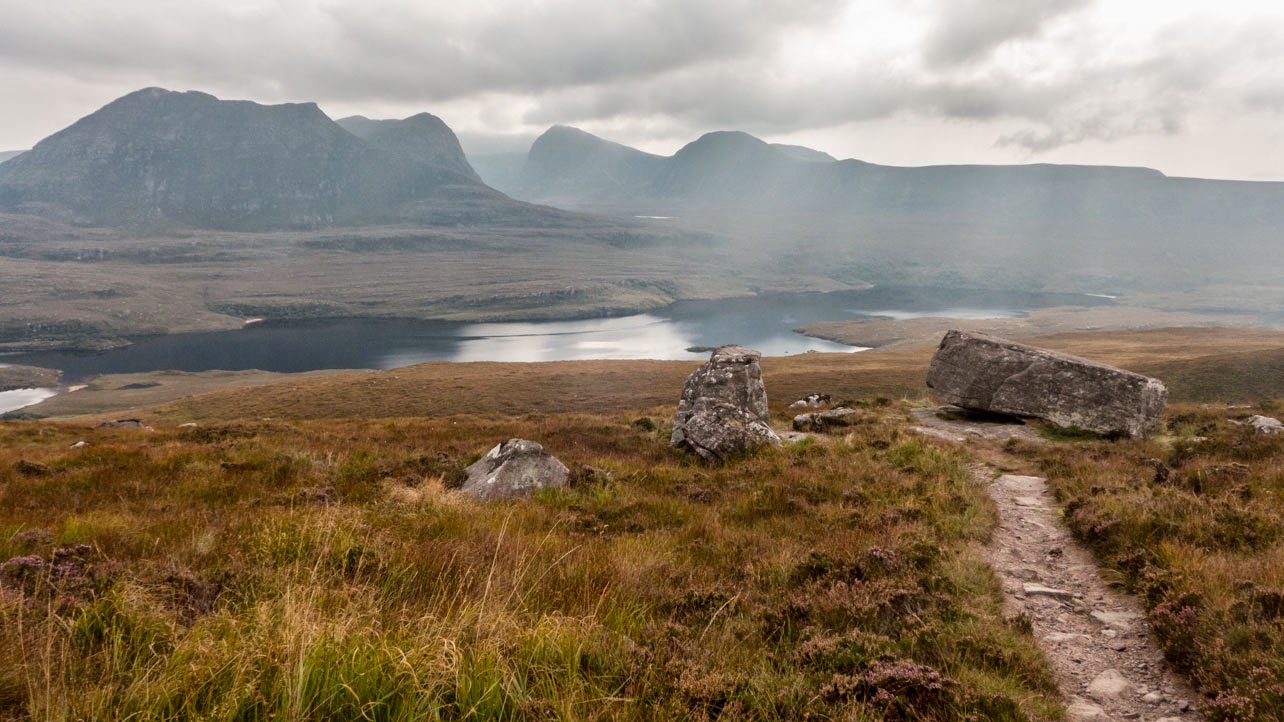 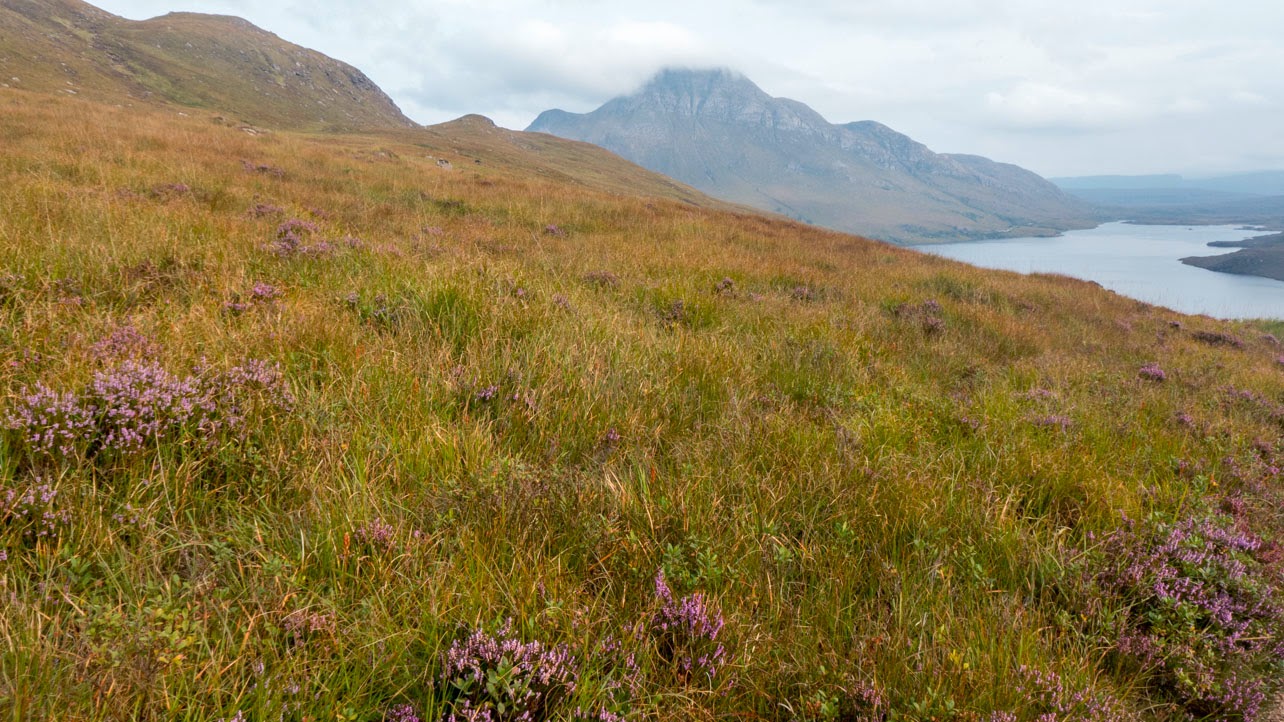 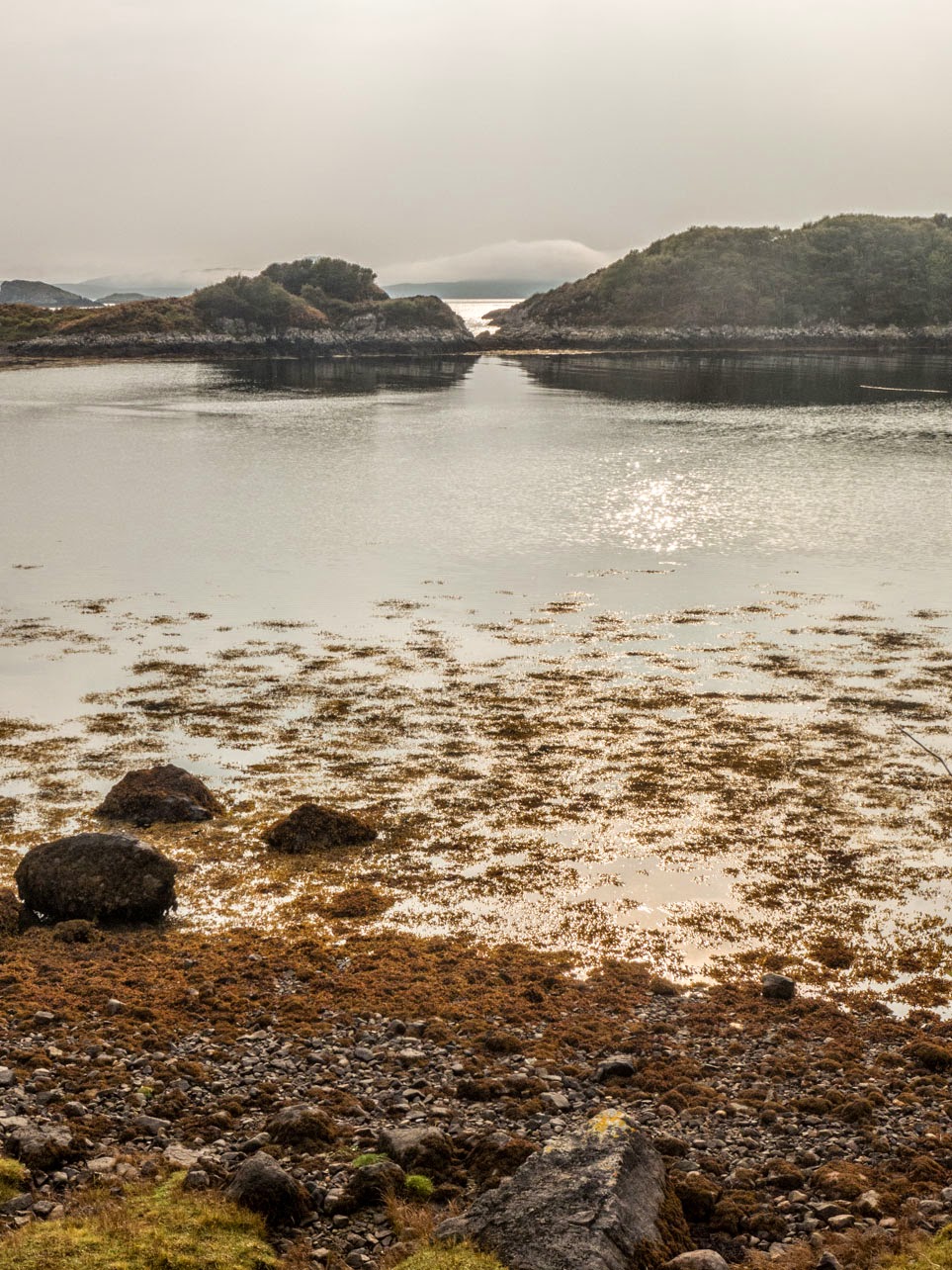 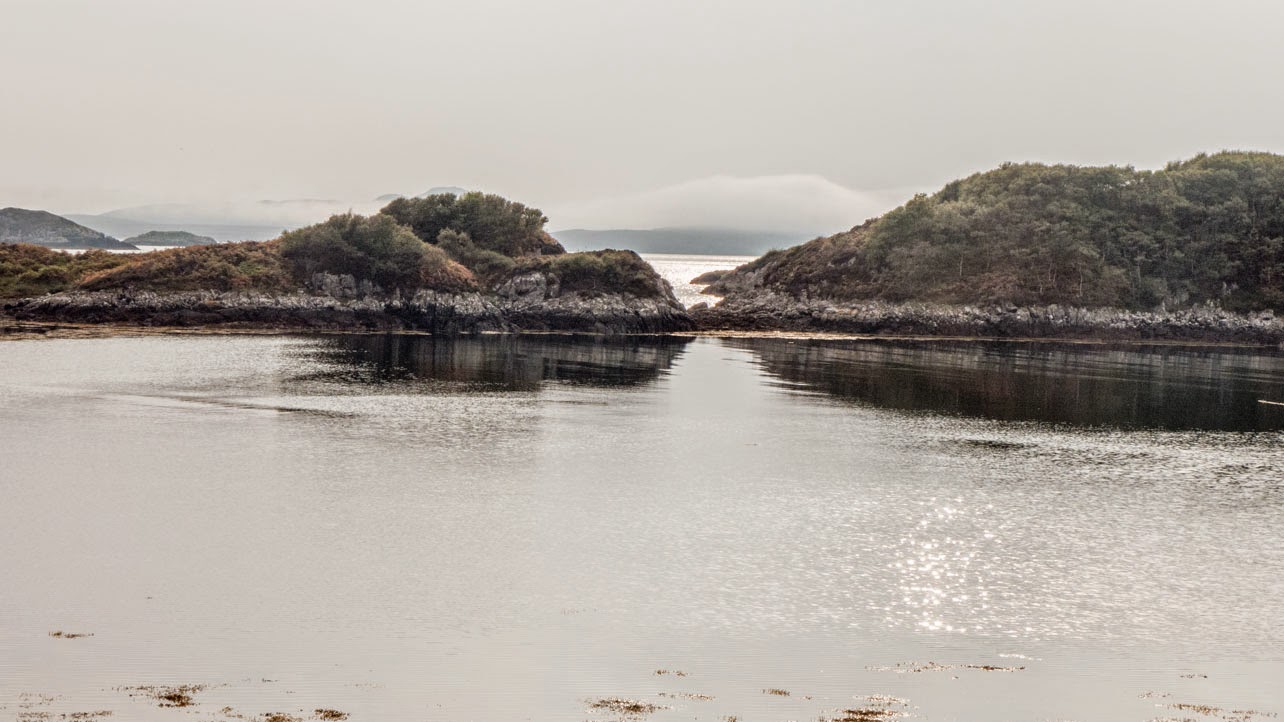