We are nearly 4 weeks into Lockdown 3 now and so far we had not been walking anywhere apart from our front door very locally.  I had only taken my car out once but, conscious of the fact that in the first lockdown I had to have a new battery because it had stood too long and also the need to pick up some medication at the vets, we decided to drive to Tetney Lock to walk along the sea bank to Horseshoe Point.

We had the parking area to ourselves when we arrived and when we returned our car was still the only one there and we saw very few people out walking so felt very safe.  I immediately noticed that the Louth Canal was incredibly full and, although the sluice near the village was fully open, the water was flowing over the top.  I had never seen it so high.  A friend has been photographing the canal up in Louth and points out that Keddington Lock has nearly been washed away and is to be dismantled.  This is a prime example of climate change in practice.  As the planet warms up the atmosphere is able to hold much more water vapour than normal and so our rainfall is much more severe than it used to be, often catastrophically so.  The problem is also one of canalisation and land reclamation.  Old river systems have been straightened out and the meanders removed.  Those meanders slow down the flow of the river and help to control floods.  In this case the river Lud has been canalised for commercial reasons but managment of it no longer happens and the old river has more or less disappeared.  Perhaps if the old river with its meanders were to be maintained, then it would take some of the excess runoff water and help to alleviate floods.  The coastal marsh between Louth and Tetney has long since been drained for agriculture.  In times gone by the marshy fenland would have soaked up floodwater when the old river Lud overflowed its banks.  Now the land is drained by arrow straight ditches and drains straight into the canal whose banks have been raised to contain the water.  Now there is great potential for disasters like the Louth floods of recent times.  I understand there are now flood prevention measures in place in Louth, so, instead, Keddington Lock is washed away.  Louth has escaped lightly this time, but what of the future.  Some climate forecasts suggest, pessimistically that in 50 - 100 years time the Lincolnshire Coastal Marsh will be inundated and cease to exist.

Having depressed myself by the state of the high water it was time to set off on our walk.  When we arrived the sun was still out but rain clouds were sweeping in from the north with the sun lighting up the clouds beautifully.  Undaunted we carried on; the weather forecast told us it wasn't going to rain.  It did!!!  Ah well such is life.  We continued to the outer sea lock and then walked south along the outer sea wall.  Between here and Horseshoe Point there is an outer and inner sea wall with the land in between drained for agriculture.  I can't help but think that this would make another flood mitigation site such as the ones at Alkborough and Donna Nook.

Once at Horseshoe Point we followed the path across the marsh to the dunes where we found a large piece of driftwood to sit on for our lunch with views over to Spurn Point.  It was a joy to listen to the bubbling song of curlew ringing across the marsh.  We returned by the inner sea wall, from where we saw a group of roe deer in the field, and then back to the car.  An excellent walk even if the weather was somewhat inclement. 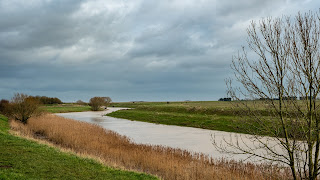 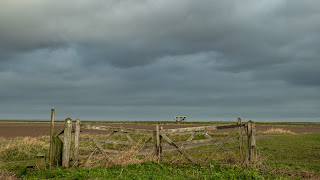 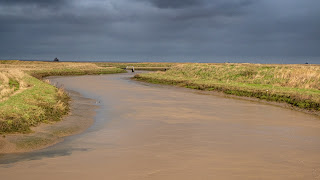 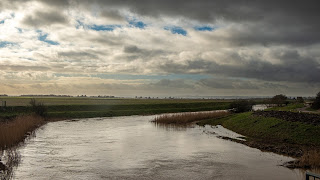 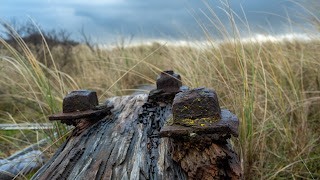 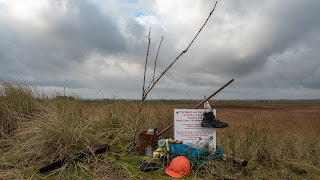 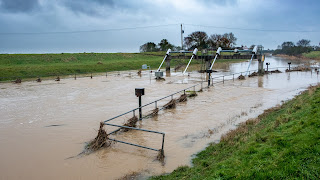