Over the last few weeks we have been blessed with colourful and dramatic skies both at sunrise and sunset.  On Thursday I dashed out into the Wolds with Thomas after a rushed meal and just managed to catch the last of the sunset of the harvest fields.  Last night it was the turn of Cleethorpes to receive the attention of my camera.  Although Cleethorpes, itself was buzzing, I thought that the sunset was going to be a damp squib and took an image of a groyne looking away from the sun as I liked the sky.  Then I noticed some colour appearing and the clouds behind me lit up as the sun sank behind them.  What a sunset it turned out to be, made even better by sheets of rain high in the clouds glowing deep red in the light from the sun.  Amazing.  This morning I was up at 5.00 and down to Cleethorpes for 5.30 ready for the sunrise.  A much quieter affair this morning though but beautiful nonetheless.  It was certainly good to be out so early and I enjoyed the call of the curlew carrying from the tide line.  I was also impressed with the guy going for an early swim - at first I wondered if it might be the swim that needed no towel!!!

Images below: sunset in the Lincolnshire Wolds. 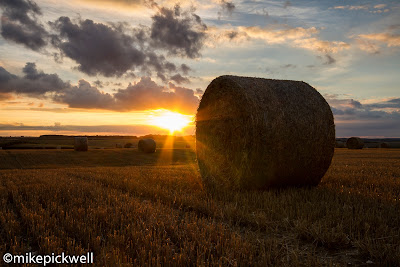 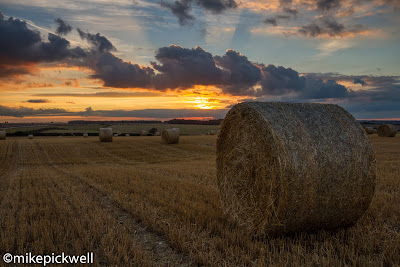 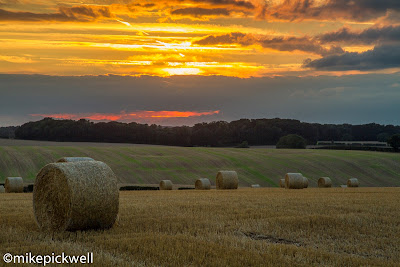 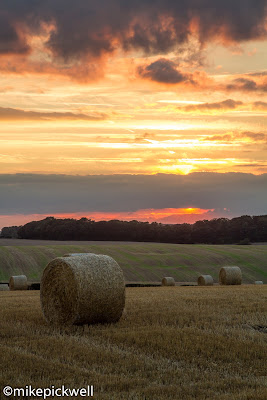 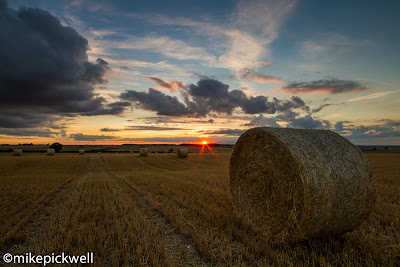 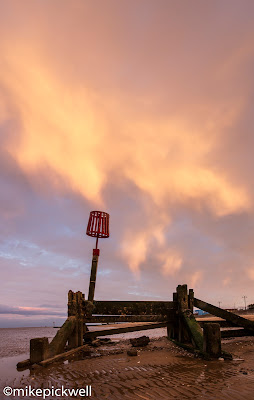 This morning's sunrise at Cleethorpes. 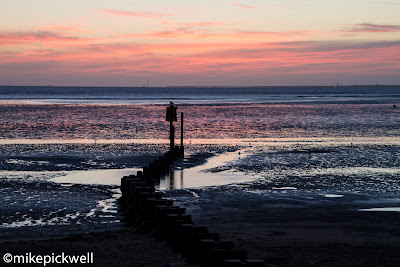 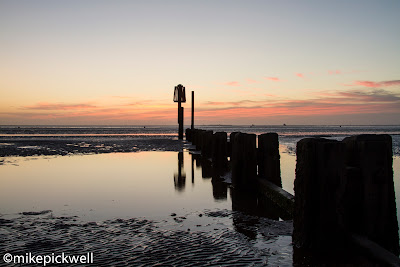 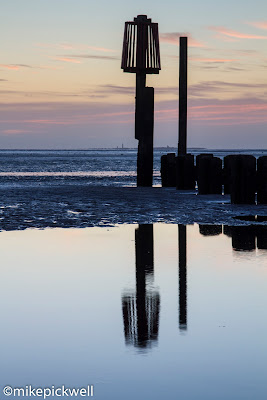 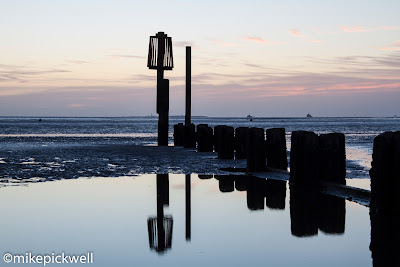 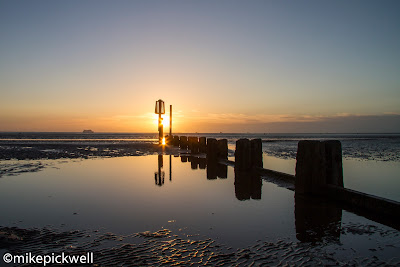 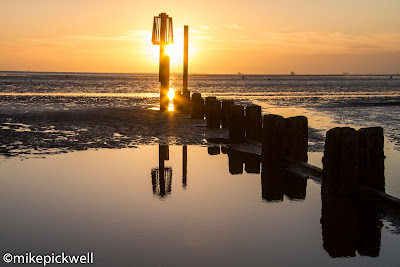 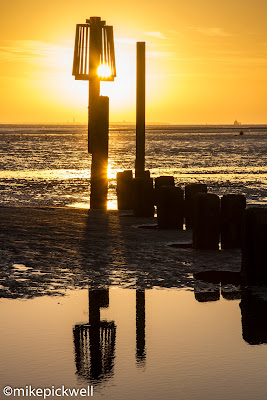 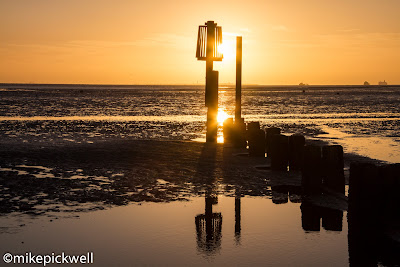 I had arranged to meet good friend and fellow wildlife photographer Richard Tadman at Frampton, near Boston, so I was up early, breakfast and pack-up done and away not much after 7.00.  Poor Richard had an earlier start as he had to travel from Huddersfield.  It had turned foggy over night but by the time we met up at the reserve it had already begun to clear and turned into a hot day with clear skies giving rather contrariety light.  We are never happy; too cloudy, no cloud, too windy, rain!!!!  On the way down I noticed that some trees, especially horse chestnuts were already beginning to don their autumn colours and, despite the hot sun, there was a back end feel to the air.  Although there were lots of birds around most were too far away for clear photographs but I still managed to almost fill two memory cards and, photography apart it was an excellent days birding.  The highlight was the large numbers of black-tailed godwit (approximately 3000 - counted every one!).  The birds were never settled and always restless and on the move producing a constant busy whistle.  It was understandable as a peregrine mad regular forays into the flock causing them all to take to the air, filling the sky with their whistling and the sound of thousands of wings before they settled again.  On one occasion the raider took a bird in front of the 360 hide, photographic reactions were, however, much too slow.  From time to time I could hear wigeon whistling, making the hairs on the back of my neck stand on end.  This is one my favourite bird sounds and evocative of winter, fog shrouded marshes.  I had a job spotting them at first until I realised that they were in eclipse plumage; I find ducks a nightmare to identify at this time of year.  I was also pleased to see several little gulls but a non-bird highlight was the good views I had of three clouded yellow butterflies.  These insects are really a continental species and rarely stray north of our south coast but this year, due to the hot summer, many have strayed as far north as Lincolnshire.

Came across this today; a Cree Indian prophecy:

Thought provoking!!
Posted by Mike Pickwell at 04:25 No comments:

Dog Walking in The Wolds.

We certainly seem to be having a great summer for a change.  Today dawned warm and sunny yet again; very enjoyable but it does mean that we have to spend more time watering the garden.  Having unpacked and recovered from our week away yesterday, it was time to take Jet (Heather's cousin's dog) for a walk.  We opted for a local walk from Irby just outside Grimsby.  The countryside was bone dry, as it has been for some time now.  Much of the harvest is now safely gathered in and most plants are going to seed..  There are still plenty of butterflies on the wing though and it was good to see small tortoiseshell, brimstone and, especially, painted lady; my first of the year.  The season of mists and mellow fruitfulness is soon going to be upon us; we found ripe blackberries, ripening wild damsons, hazel nuts and lords and ladies in fruit.  We also found a single large sunflower in a field of oilseed rape.

A Wonderful Week in Derbyshire.

Last week we had arranged to take our caravan over to Bamford to meet up with my brother and his wife.  They have a permanent pitch at Swallowholme and excellent site in the Hope Valley and we were looking forward to catching up for a few days.  Also planning to be there were long time mutual friends Pete and Anne, both runners and Pete is also a talented landscape photographer.  Plenty of walking, running photography and chilling were planned.  We had a good journey over on Tuesday 13th and were soon settled in and enjoying a BBQ.  The next day I was keen to visit Millers Dale Quarries to see if there were any dark green fritillary butterflies on the wing.  I was up early for a run with my brother, Peter, after which it was time for a lazy breakfast in the sun.  It turned into a lovely warm day with plenty of sunny intervals although it clouded over in the afternoon.  We enjoyed an excellent day in the quarries.  There were plenty of butterflies on the wing, especially peacock and large white but sadly no fritillaries.  We also found meadow brown, gatekeeper, small white, common blue and green veined white.  There was plenty of marjoram in flower as well as St John's Wort.  Peter came across some green woodpecker feathers on an anthill and we could only surmise that a sparrowhawk had taken it while it was anting.  We had good sightings of a barn owl, spotted flycatchers and a peregrine.


The next day again dawned sunny and hot.  The plan for the day was to visit Hopton Quarry Derbyshire Trust Reserve to see if we could find some broad leaved helleborines in flower.  The journey took us down past Matlock where I noticed that there was an exhibition of the images from the British Wildlife Photography Awards; a target for a wet day.  We soon arrived at the quarries and were delighted to find a beautiful comma butterfly as we entered the reserve.  A good start.  Peter very soon found a helleborine and eventually we discovered about ten altogether.  Difficult to photograph, however, as the light levels were very low.  As well as the plants we had found the previous day we also found fragrant and frog orchids, although they were well past their best.  As well as the comma, the same butterfly species were on the wing as yesterday.  Heather's find of the day was a couple of female southern hawker dragonflies busy ovipositing on the edge of a small muddy pool thick with bulrushes.  House martins and swallows were gathering in numbers; they will soon be leaving our shores and winter visitors will be arriving.  We had excellent views of a pair of ravens which looked as though they were rearing young on the quarry walls.  They kept taking to the air to very noisily see off a pair of peregrines which we think had also bred in the quarry.  They were also joined by a solitary buzzard.  The final bird highlight of the day was a super male redstart.


Pete and Anne had arrived at their caravan when we returned and Pete and myself decided on an early morning's landscape photography.  We were up and out the next morning at 6.00 am, despite to poor weather which soon turned to rain.  Instead of early light on Mam Tor we opted for Bole Hill Quarry near surprise view for some close up landscapes of the silver birches which grow there.  Despite the rain we enjoyed wandering among and photographing these lovely trees.  Eventually we returned wet, bedraggled but satisfied with our efforts for breakfast.  As the day went on the weather improved and all six of us enjoyed a very pleasant walk from Higgar Tor across the moor to Over Owler Tor and back.  The heather is now in its prime and the moor glows purple and looks wonderful set against bright green bracken and vibrant blue skies.  We returned to the site in time to watch Mo Farrah win the World Championship 5K and then brother Peter and myself drove up to Hordron Stone Circle on Moscar Moor between Ladybower and Stanage Edge.  Despite only being a small circle of nine stones, it still has a magical atmosphere and will repay a return visit when there is a dramatic sky.  After taking some photographs we declared it beer o'clock and set off back for another BBQ.

Saturday began with another early morning landscape session, this time on Mam Tor.  Unable to persuade brother Peter, Pete H and myself set off again at 6.00 and by 6.30 had the mountain and The Great Ridge to ourselves.  We wandered along the ridge to Back Tor enjoying the changing light as we went.  After breakfast, as the weather forecast gave rain, we decided on a trip back to Matlock for the BWPA exhibition which was excellent.


Sunday began with an early morning run with brother Peter and Anne up to Ladybower dam and back and then we enjoyed a chilling out morning.  Our son Thomas had arrived as well as his cousin Michael and these two went out on their bikes for a long ride.  When they returned they were entertained with Tour de France images taken by Peter and Linda and Pete, Anne, Heather and myself went for a local walk up to the ridge on the other side of the valley.  The evening meal was an excellent Tartiflette cooked by Peter.


Although, sadly, our next day was to be our last it again dawned fine and sunny.  Another early morning photoshoot was the order of the day, this time up to Millstone Edge and Over Owler Tor.  Again Pete and I were up and out at 6.00 a,m. and quickly up on Millstone Edge.  The early morning light was wonderful but as the sun rose it quickly turned harsh and contrasty.  All too soon it was time to return to the caravan for breakfast and packing to return home.
A brilliant week.

Posted by Mike Pickwell at 12:52 No comments: