A damp start today, but undaunted we headed to Staveley to visit the excellent Cumbria Stoves to pick up a new baffle plate for our Morso Squirrel wood burner before continuing to Brockholes Lake District Visitor Centre.  It was incredibly busy with young families out for a day of outdoor adventure activities on and off the water.  It was somewhere our children would have loved 20 years ago for the exciting looking Go Ape style high ropes courses and long zip wire.  We had braved the crowds, however, to visit a photography exhibition in the much quieter hall.  Rosamund and John MacFarlane, parents of nature writer, Robert.  Unable to travel during the last 18 months due to covid, the MacFarlanes were exhibiting their lockdown project where all of the images were taken close to their Loweswater home.  Rather than general views of The Lakes, their theme was water in the Lakes: over it, in it, under it and frozen during the incredible cold spell of Januray 2021.  They had also collaborated with painter Julian Cooper who had produced a large canvas based on one of John's images of a swimmer underwater in a deep mountain pool,  Apart from enjoying the photography it yet again made me hanker after doing some wild swimming - maybe next year.
Posted by Mike Pickwell at 02:25 No comments:

As we turned into the car park at Sizerh Castle we were astounded at how busy it was. At this juncture Anna was walking back to put a parking g ticket in their car and recommended the overflow car park which we duly parked up in.  We soon joined Gordon at an outside seat in the cafe where we enjoyed a pleasant lunch.  It was then time to explore the beautiful gardens.  We were keen to see the stampers which we had last visited on a rainy day in 2016 just after its installation.  It comprises a  small sunken area of the garden liberally supplied with old gnarled tree roots.  In 2016 it was very raw but now is verdant with ferns, tree ferns and other fascinating plants scrambling over the stumps.  We moved onto the still colourful late summer borders and then the kitchen garden with, not only very healthy vegetables, but myriad flowering plants, some perhaps attracting insect 'pests' away from the veg.  Moving on to the sunken rockery garden we were I pressed by the beautiful acers. After a quick look out over the Lake garden it was time to head back for a cup of tea and a lust over the several Morgan cars waiting for their owners.
An excellent day.  We mustn't leave it another 5 years before our next visit.
Posted by Mike Pickwell at 02:04 No comments:

After our active day yesterday it was pleasant to have a relaxing day.  We pottered and read in the sun during the morning before going for a local walk around Ratherheath Woods enjoying and photographing early signs of Autumn and the plentiful fungi, all of which wait to be identified.  A myriad of colours were exhibited including a grey one with white gills, a colour I not seen before.  We bbqued in the early eving sun before walking out to 'the tree' for some evening photographs.
Posted by Mike Pickwell at 02:53 No comments:

A walk to the facilties at 5.00 am revealed a crystal clear star spangled sky.  The Plough, Orion and other constellations stood out clearly and the milky way arced over the site.  Two hours later we woke to a cloudless, but chilly, morning, significantly colder than of late at 7C.  Breakfast was pleasant as the sun rose and warmed the air and with birds visiting the feeders buzzed backwards and forwards.
Having negotiated a relatively traffic free Kendal, we were soon pulling into the car park at Larch Cottage Nursery near Penrith where we had arranged to meet Peter and Linda.  It was good to catch up over coffee and cake in the excellent cafe before pottering around the attractive nursery with its extensive range of plants.  Heather managed to restrict her plant buying to two plants!  The plan was to drive up to the head of Swindale on the eastern edge of the Lake District fells.  However when we came across a road closed sign (which in the end did not involve our route) we temporarily retreated to have lunch on the banks of Haweswater Beck where we were entertained by inquisitive cattle escaping from their field.
Swindale Beck flows down into the wide comb at the head of the valley, surrounded by modest but imposing fells, from the pass at the head of Mosedale.  In fact it is the junction of Mosedale and Little Mosedale Becks that form Swindale Beck.
We walked along first the road and then a rougher path from the farm building a Swindale Head.  As we walked the views became more and more dramatic and we could see rock climbers busy on the crags on the opposite side of the valley.  Once past Swindale Head the comb opened out and the waterfalls of Swindale Beck came into view.  After narrowly avoiding a major back incident whilst photographing the falls, we crossed the footbridge and continued along the RSPB trail along the opposite side of the valley.  The RSPB have been working with landowners, United Utilities, to reintroduce meanders into the beck to make environmental improvements thus enhancing the valley for wildlife and reducing the risk of flooding further downstream. We noticed, also, that there had been a lot of tree planting on the fellside, again providing more varied habitat for wildlife and reducing water runoff from the fells and also reducing soil erosion.  Just before crossing back over the beck we enjoyed watching a family of stonechats: adults and juveniles; good to note a successful fledging of these superb birds.  Interestingly at this point a weir had been built into the beck and fitted with turbines to generate electricity.
Following a drink stop at the cars we retreated to the warm and welcoming Strikland Arms for and excellent meal.  Another fabulous day.
Posted by Mike Pickwell at 03:39 No comments:

A relaxed start for packing yesterday and finally away at 12.00.  Stopping for lunch at Doncaster services and then shopping at Kendal Morrisons we pulled up outside the van at 5.00 and were set up with a brew by 5.30.  The only slight fly in the ointment was the fact that we don't have running water.  Initially we thought it was an airlock but further investigation revealed that the 'O'  rings had perished.  Fortunately our service engineer  is going to be on the site this afternoon so fingers crossed.
Although we had woken to a wet morning, the weather gradually improved as the day went on until we were relaxing in the warm sun.  I amused myself by photographing fungi and watching the birds visiting our neighbour's bird feeders: Nuthatch, blue tit, great tit, coal tit, Robin and the ubiquitous wood pigeon hogging the table.
Eventually the service engineer arrived to sort a neighbour's heating and bring our 'O' rings which immediately solved our problem.  Shortly afterwards we drove to Thomas's in Lancaster for excellent  fish and chips.  A good day.
Posted by Mike Pickwell at 02:12 No comments:

A Last Hurrah in the Burial Ground.

A beautiful day today so I walked around the burial ground hoping for dragonflies.  I missed the migrant hawker that had been seen yesterday but there were a few common darters on the wing beginning to look a bit worn now.  There were also good numbers of speckled wood butterfly and various species of white.  I was also fascinated by the galls from the silk buttoned gall wasp on some oak leaves.

Perhaps the last of the butterflies in the burial ground for this year. 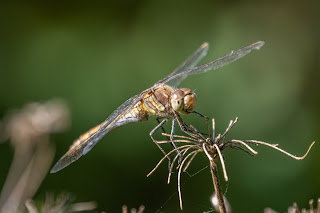 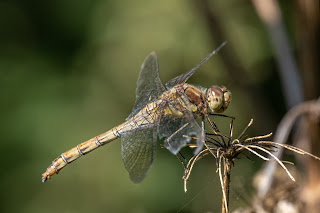 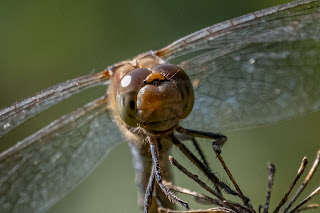 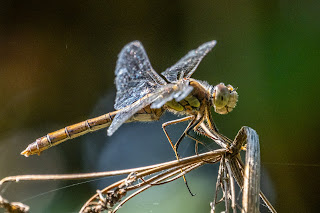 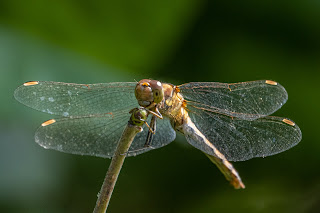 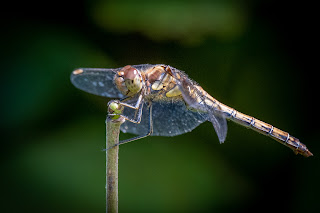 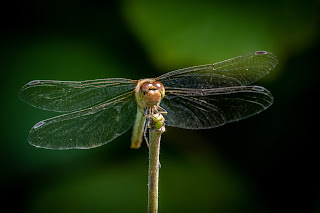 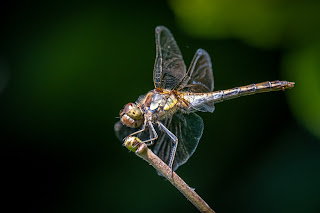 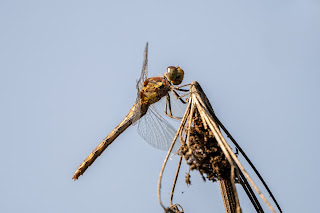 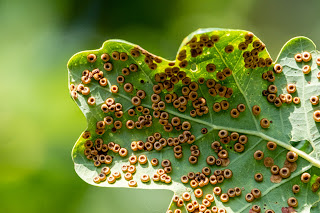 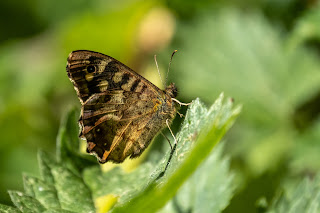 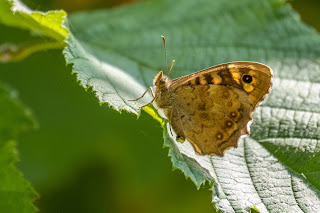 Posted by Mike Pickwell at 03:02 No comments: