Butterflies in the Garden and a Heatwave.

From Sunday 17the July to 21st July we experienced the highest temperatures this country has ever seen.  It began on Sunday with a maximum of 32C increasing to 37C on Monday.  The peak, however, was Thuesday when our weather station recorded 40.3C.  This same temperature was recorded at RAF Coningsby and Humberside airport, breaking the previous record of 38C from three years ago.  The nightime minimum broke all records as well and on the Tuesday/Wednesday minimum was 22C.  It was even warmer in the house and it was impossible to sllep that night.  Not only were temperatures incredibly high, there were wildfires throughout the country including the complete destruction of some houses.  One man had gone to help his neighbour fight a spontaneous combustion in his compost heap but it set fire to the fence, destroyed the garages and then the houses.  This is a taste of what could be to come if we do not get to grips with a heating world.  It is, at the moment, a rare occurrence for this country but common place now all over the worlf including much of Europe.

On the morning of the 18th, while it was still cool enough to go outside I managed to photograph a couple of butterflies: small white and gatekeeper. 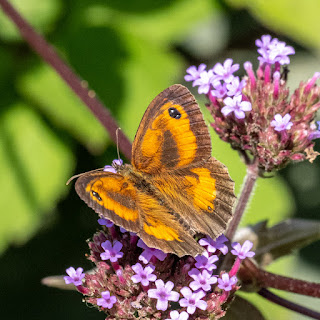