With a friend Heather and I went out to try and photograph another supermoon; this one the Buck Moon, so called because this is the time of year when the deer's antlers are fully grown ready for the rut in Autumn.  This time we decided to go to the yacht club car park on the Fitties as, in theory, there would be an unimpeded view.  This would certainly have been the case had there not been a thick bank of cloud on the horizon.  We eventually gave the cloud best and went home hoping to photograph it later in the evening.  Unfortunately it did't climb very high in the sky and, even when it emerged from the clouds it remained hidden by trees.  The following night, however, I was awake at 3.30 and managed some shots through a gap in the trees. 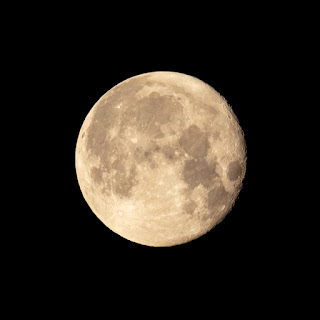